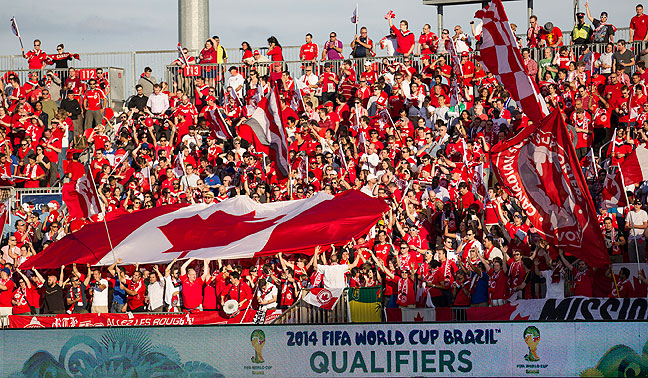 National team support building on and off the pitch

National team support building on and off the pitch

Tickets to next two home matches on sale this Thursday 14 June.

In the Canadian Soccer Association’s centennial year, the momentum continues to build both on and off the pitch for Canada in the current cycle of FIFA World Cup Qualifiers. After two more matches in its mission to qualify for Brazil 2014, Canada has seen that support at both at home and abroad in this 2012 calendar year. Several hundred Canadian fans recently traveled to Cuba to cheer for Canada last Friday 8 June while a pro-red Canadian crowd was out in full in full voice at BMO Field on Tuesday 12 June.

“The crowd was fantastic,” said Canadian head coach Stephen Hart. “I really have to thank the fans. They were there (on Tuesday 12 June) to give us a push.”

Canadian soccer fans can now continue to build on this momentum by purchasing individual tickets to the upcoming matches as of Thursday 14 June. Tickets to Canada’s next two home matches in FIFA World Cup Qualifiers are available via ticketmaster.ca or by phone at 1.855.985.5000, with full information available on CanadaSoccer.com. Group discounts are available via marketing@soccercan.ca or 613.237.7678. At BMO Field in Toronto, Canada faces Panama on Friday 7 September and then Cuba on Friday 12 October.

Canada has four points after two matches, with four more matches to be played in September and October. On Friday 8 June, Canada opened the CONCACAF 3rd Round of 2014 FIFA World Cup Brazil Qualifiers with an away 1:0 win over Cuba. Four nights later, Canada drew 0:0 at home with visiting Honduras in front of 16,132 fans at BMO Field in Toronto.

Canadian fans are not only supporting the team in the stands, but donning official gear in record numbers, too. The Canadian Soccer Association and its official supplier Umbro have reported that merchandise sales at BMO Field in 2012 have already increased nearly 40% compared to 2011. In fact, that trend has carried through all official Canadian Soccer Association merchandise sales across the country. Official Umbro gear is available at CanadaSoccer.

Announced on Thursday 14 June, Canada and Umbro reported that all 1,912 limited-edition Centennial blue Canada jerseys were sold out.