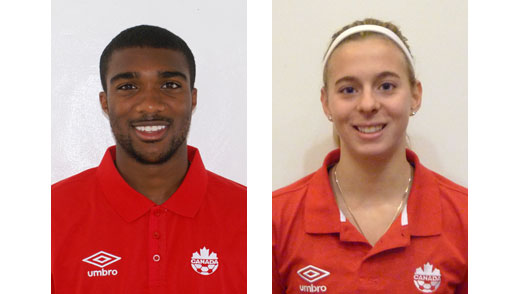 Morgan, Pietrangelo named Canadian U-20 Players of the Year

Morgan, Pietrangelo named Canadian U-20 Players of the Year

The Canadian Soccer Association announced today that Ashtone Morgan and Amélia Pietrangelo have been named Canadian U-20 Players of the Year for the 2011 soccer season.

Morgan is a fullback and midfielder that plays for his home club Toronto FC in Major League Soccer. He is also a member of Canada’s national team, having made his debut at the international “A” level in FIFA World Cup Qualifiers in October (he came in as a substitute and recorded an assist in a 7:0 victory over St. Lucia). A month after his debut, he was called into a second national camp and made his first start in FIFA World Cup Qualifiers, this time playing all 90 minutes of a 4:0 victory over St. Kitts and Nevis at BMO Field in Toronto.

With his club, Morgan made 14 appearances in Major League Soccer in 2011. He also played in all eight of Toronto FC’s CONCACAF Champions League matches, helping the team qualify for the quarter-final phase in2012.

As for Pietrangelo, the Laval, QC forward is in her second season with the Canadian national team. After making her debut at the international “A” level in December 2010, she was called into Canada’s camps in April and May and even made an appearance as a substitute in a 2:0 victory over Netherlands on 28 May. All this occurred before her 18th birthday. Then in October at the Pan American Games, she came off the bench to score her first international goal against Costa Rica and then made two more appearances as a starter en route to Canada’s gold medal at Guadalajara 2011.

Born in 1993, Pietrangelo will be eligible in 2012 to represent Canada at the CONCACAF Women’s Under-20 Championship and the FIFA U-20 Women’s World Cup Uzbekistan 2012. Away from the national team, Pietragenlo will continue her studies at Rutgers University where in 2011 she was a freshman with the school’s women’s soccer team.

CANADIAN U-20 PLAYERS OF THE YEAR