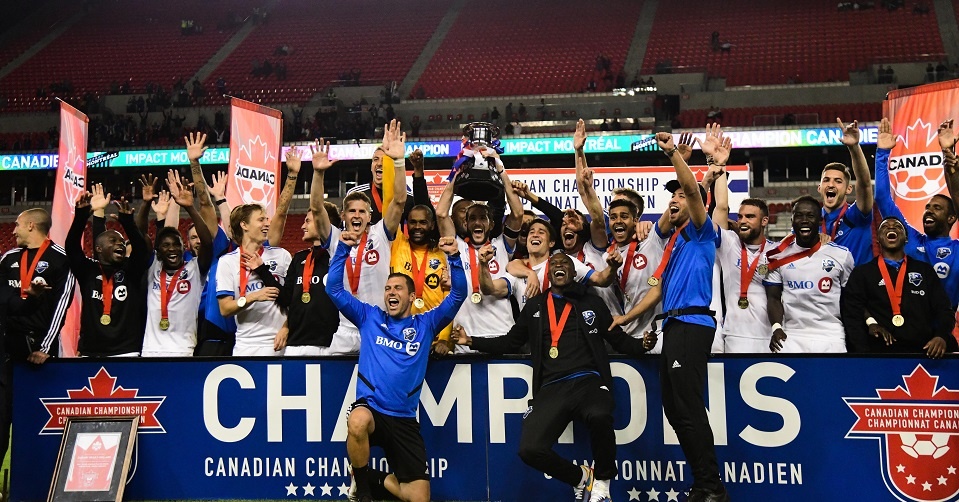 Montréal Impact won their fourth Canadian Championship after defeating Toronto FC to lift the Voyageurs Cup and qualify for 2020 Scotiabank Champions League. After both sides […]

The 2019 Canadian Championship was the largest and longest to date expanding to 13 teams across five leagues and five rounds of competition. A new record for attendance was set with 154,398 spectators attending in 2019 bringing the total attendance to over one million since the competition’s inception in 2008.

Toronto FC’s Tsubasa Endoh scored in the 69’ for a 1-0 Toronto FC lead in the second leg of the Final to draw even with Montréal FC on aggregate and push the match to penalty kicks. Alejandro Pozuelo was the lone TFC player to convert a penalty, with Altidore and Osorio each hitting the woodwork after Patrick Mullins saw his penalty saved by Montréal Impact goaltender Clement Diop. Montréal’s Bojan Krkic, Daniel Lovitz, and Rudy Camacho all converted their penalties to give the Impact the title.

Montréal Impact join 10 other direct entrants into the 2020 Scotiabank Concacaf Champions League. Mexico’s Club America, UANL, Cruz Azul, and Leon qualified through the 2018-19 Liga MX season which places the winner and runners-up of the Apertura and Clausura competitions into Concacaf Champions League. Major League Soccer’s LAFC and Atlanta United have also qualified as direct entrants with two more MLS teams due to qualify by season’s end. As well, Jamaica’s Portmore United have qualified via the Concacaf Caribbean Club Championship. They will be joined by the top six finishers from the Quarter-Final of the Concacaf League which will be determined at the end of the Quarter-Final Round on 3 October.

2020 Scotiabank Concacaf Champions League matchups will be determined by a draw scheduled for December 2019. The competition will kick off in February 2020 with the Final played over two legs in April 2020.

Toronto FC controlled the majority of the first half working for a goal to tie the aggregate score at 1:1. Montréal did an excellent job defensively, keeping the home side isolated to wide areas and collapsing into the penalty area to hold on to their lead.

The first real chance of the match came in the 22’, when Toronto FC’s Tsubasa Endoh put in a fantastic cross to Jozy Altidore who took it down with his chest before his shot soared over the Impact’s net. In the 26’, Montréal Impact’s Ignacio Piatti cut inside from the wing and got a great shot away from the top of the penalty area which Toronto FC keeper Alex Bono was able to push away from danger.

Soon after, Omar Gonzalez had a good chance off a Toronto FC corner but his header went a foot wide of the near post. In stoppage time in the first half, the home side again narrowly missed the net after a nice play from Altidore.

Late in the first half, Pozuelo played a through ball perfectly into Altidore’s feet as he made a run through the Impact’s backline, but the Toronto striker pulled the shot just past the far post.

Five minutes into the second half, Toronto FC’s Richie Laryea made a blistering run down the wing from the box to the Montréal Impact’s penalty area. Laryea pulled a pass back to Osorio who played a one touch ball to set himself and create a shot which rang off the post.

In the 59’, Montréal Impact’s Krcik tried to catch Bono out of the net with a shot from the halfway line that just missed the target. As the match opened up, it was the Impact who became dangerous with Toronto pushing for the goal. Piatti received a cut-back pass at the top of the box and he made a good move to find the space for a shot but didn’t have the power to beat Bono (67’).

Toronto FC’s goal from Enzoh in 69’ resulted from a quick corner taken by Pozuelo and Altidore that was crossed to Osorio who took it down, hesitated and beat one of the Montréal Impact’s defenders, and managed to get the ball to Endoh who hammered it at the net and it snuck its way past Montréal Impact keeper Clement Diop.

Minutes later, TFC almost doubled their lead in the match as Auro Jr. fed the ball to the back post to Delgado whose shot ended up flying over the post.

Toronto FC was forced to play with 10 men for the final six minutes of the match after Montréal Impact’s Lassi Lappalainen was played in alone behind the defence from halfway. Chris Mavinga brought down the Impact striker just outside the penalty area and was shown a red card.

Moments later, Lappalainen again caused problems for the home side, picking out Piatti at the top of the box who was able to control the pass and find space to get a shot off that beat Bono but rattled the crossbar (90’) sending the match to penalty kicks.

Dubbed the Battle of the North, the Championship sets itself apart from all North American professional sports competitions that operate on both sides of the border as the only one to hold an all-Canadian competition that leads to the international stage. The winner has the opportunity to compete in international competition including the Scotiabank Concacaf Champions League and ultimately the FIFA Club World Cup.

About Canada Soccer
Canada Soccer, in partnership with its membership and its partners, provides leadership in the pursuit of excellence in soccer, both at the national and international levels. Canada Soccer not only strives to lead Canada to victory, but also encourages Canadians to a life-long passion for soccer. For more details on Canada Soccer, visit the official website at www.canadasoccer.com.