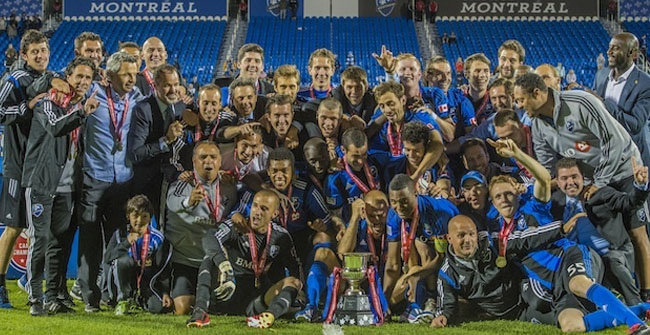 As a result, the bleu-blanc-noir joins the New York Red Bulls and Club Deportivo FAS, from El Salvador, in Group 3 of the CONCACAF Champions League.

“I think you have to seize the moment,” said head coach Frank Klopas. “We talked about it in preseason and this was one of our goals. It was a big game and I give all the credit to my team because we fought for 90 minutes. It means a lot to get a clean sheet against a very talented team. I am very proud of the team, and that`s not only for the team, but this is for Montreal. I`m excited to be part of it.”

A 0-0 tie would have seen the Impact advance, but Felipe, who played much of the game out wide, ensured that there were no surprises, pouncing on a rebound from a Marco Di Vaio shot that ricocheted off the crossbar in the 91st minute.

“My role is to play. It doesn’t matter where they put me, I am here to play,” said the Brazilian midfielder. “I want to thank the coach because he has helped me a lot and given me a lot of confidence. We are together a great group and we have to continue to do the job we did today.”

Out-possessed for parts of the first half, the Impact played solid defensively, closing down the middle to ensure that TFC’s striking tandem of Defoe and Moore could not penetrate into the box and preserve Evan Bush’s third career clean sheet in ACC play.

Building from the back, the bleu-blanc-noir was still able to find a few good scoring chances from the first 45, including a 28th minute header by Jack McInerney that just sailed over the bar.

Toronto held their breath shortly after the break when a Patrice Bernier cross dropped onto the crossbar, but the second half was largely theirs. The Impact needed several crucial interventions from defenders and midfielders tracking back after Toronto FC head coach Ryan Nelsen introduced a third forward, Gilberto, who stayed up top with Jermain Defoe and Luke Moore.

“We didn`t want to be content with a 0-0 game,” explained captain Patrice Bernier. “We pushed through and created a lot of opportunities today. So yes, it was part of our plan to win, to protect our title as champions, and it meant even more to us to do it at home.”

Following his club’s lead, midfielder Justin Mapp was named MVP of the tournament for a second straight year.