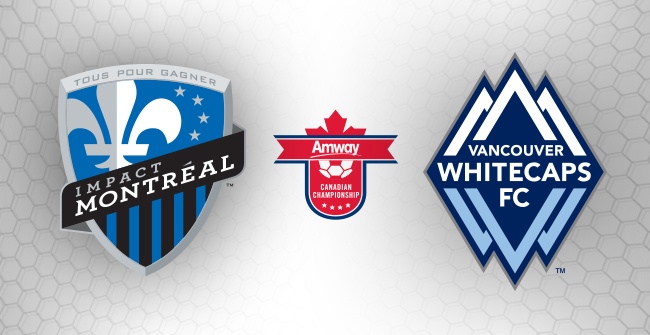 The two-leg final gets underway on Wednesday, 12 August, at Stade Saputo in Montreal

The 2015 Amway Canadian Championship has reached its climax and both the Vancouver Whitecaps FC and Montreal Impact will be looking to clinch the Voyageurs Cup as the two-leg final gets underway on Wednesday, 12 August, at Stade Saputo in Montreal.

The Impact is trying to win their third straight Canadian Championship. Both teams, meanwhile, are vying for the coveted spot in the 2016/17 CONCACAF Champions League. The second leg takes place on 26 August at BC Place in Vancouver.

In their pursuit of their first Voyageurs Cup, Vancouver reached the final after a close battle with FC Edmonton from the North American Soccer League.

After snow forced a change in the schedule, Edmonton and Vancouver played to a 1:1 draw at BC Place in the first leg of the tie with Vancouver ultimately taking a 2:1 result in the second leg in Edmonton.

It was a thrilling finish in that second leg when Tomi Ameobi scored a stoppage time penalty to seemingly force extra time but Matias Laba added a late winner seven minutes into second half stoppage time to break the Eddies’ hearts.

Montreal also advanced in dramatic fashion after beating Toronto FC on the away goals rule with the two teams were tied 3:3 on aggregate.

The Impact had won the first leg 1:0 in Montreal on 6 May with Toronto fighting back and led 3:1 late in the second leg at BMO Field. But former Toronto FC player Dominic Oduro scored in the 84th minute to tie the aggregate and give Montreal that vital away goal to send them to the final.

This is the second time that Montreal and Vancouver will play for the Voyageurs Cup since both teams joined Major League Soccer.

In 2013, Montreal hoisted the trophy at BC Place in Vancouver when the two-leg series was tied 2:2 with Montreal winning by virtue of the away goals rule.

The 12 August Montreal-Vancouver match (19.30 ET / 16.30 PT kickoff) will be broadcast live on Sportsnet World and TVA Sport, as well as available online on sportsnet.ca.

The return and final match of this year’s Championship will air live on Wednesday 26 August (22.00 ET / 19.00 PT) on Sportsnet One, Sportsnet World and TVA Sports.

Vancouver is Canada’s representative in the Champions League this year as they were the top finishers of the Canadian teams in the 2014 MLS standings. They opened the tournament last week with a 1:1 draw against Seattle Sounders FC.