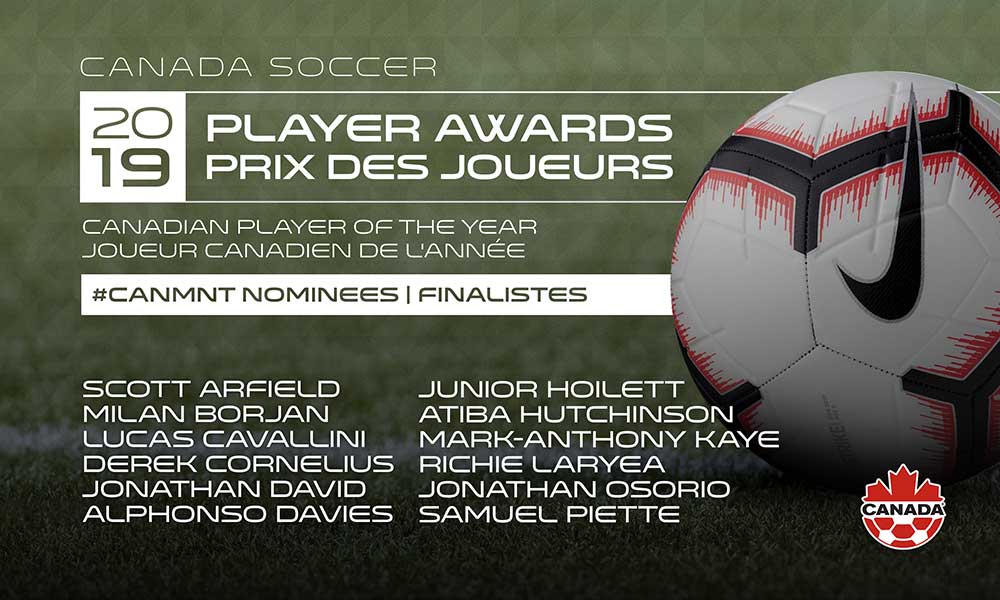 Scott Arfield | #CANMNT & Glasgow Rangers FC (Scotland)
Scott Arfield captained Canada to their first international “A” victory over USA in 34 years and had the assist on the winning goal. At the club level, he scored eight goals and six assists from January through November with Rangers FC in both domestic and UEFA Europa League action.

Lucas Cavallini | #CANMNT & Puebla FC (Mexico)
Lucas Cavallini set a joint-national record by scoring eight international goals in 2019, including goals against both Mexico and USA. At the club level, he scored 10 goals and five assists for Puebla FC.

Derek Cornelius | #CANMNT & Vancouver Whitecaps (Canada)
Derek Cornelius led all Canadian outfield players with 711 minutes as he played at centre back in all nine international matches in 2019. At the club level, he played 17 matches for Vancouver Whitecaps FC and scored his first goal in Major League Soccer, a terrific tying goal against Sporting Kansas City in May.

Alphonso Davies | #CANMNT & FC Bayern Munich  (Germany)
Alphonso Davies scored two goals and three assists at the international level in 2019, including winning goals against Cuba and USA in September and October. At the club level, he helped FC Bayern Munich win the 2018-19 Bundesliga and German Cup. He also made his debut in UEFA Champions League.

Junior Hoilett | #CANMNT & Cardiff City FC (Wales)
Junior Hoilett scored six goals and four assists at the international level in 2019, including a hat trick in a Man of the Match performance in Toronto against Cuba in September. From January through November at the club level, he scored three goals and two assists for Cardiff City FC across action in England’s Premier League and Championship.

Atiba Hutchinson | #CANMNT & Beşiktaş JK (Turkey)
Atiba Hutchinson made four appearances and helped Canada reach the quarter-finals of the Concacaf Gold Cup. He also assisted on Canada’s first goal of the year at BC Place in Vancouver. From January through November at the club level, he scored five goals and two assists for Beşiktaş including action in UEFA Champions League.

Richie Laryea | #CANMNT & Toronto FC (Canada)
Richie Laryea made his international debut in 2019 and subsequently played every minute of Canada’s Concacaf Nations League A campaign from September to November. At the club level, he helped Toronto FC win the MLS Eastern Conference Championship.

Jonathan Osorio | #CANMNT & Toronto FC (Canada)
Jonathan Osorio scored once and recorded four assists at the international level in 2019, including an assist in Canada’s big 2:0 win over USA at Toronto on 15 October. At the club level, he scored five goals and four assists for Toronto FC as the team won their third Eastern Conference Championship in the last four years.