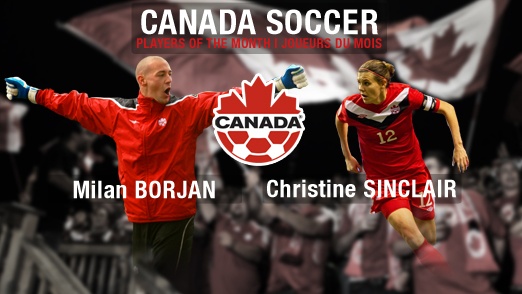 May 2012: Borjan, Sinclair named Canada Soccer Players of the Month

May 2012: Borjan, Sinclair named Canada Soccer Players of the Month

The Canadian Soccer Association is pleased to recognize Milan Borjan and Christine Sinclair as the Canada Soccer Players of the Month for May 2012.

In May 2012, goalkeeper Borjan helped his Romanian club FC Vaslui qualify for UEFA Champions League, winning six-straight matches with three clean sheets at home. The team finished second in the league standings, nearly catching Liga 1 champion CFR Cluj, but ultimately falling by a single point. Borjan’s three home victories were 4:0 over Gaz Metan Mediaş on 7 May, 1:0 over Sportul on 13 May, and 1:0 over Universitatea Cluj on 20 May. Dating back to 15 April, Borjan and FC Vaslui won nine-straight matches to the end of the season, with five clean sheets by Borjan.

Borjan is in his second season with Canada’s national team. Taking part in his first cycle of FIFA World Cup Qualifiers, Borjan will be helping Canada in CONCACAF Round 3 this June, September and October against Cuba, Honduras and Panama. The 24-year old goalkeeper from Hamilton, ON originally made his football debut at age three with Radnicki (albeit eight years old when he switched to goalkeeper). Born in Kninin, he was 13 years old when he moved to Winnipeg, MB and then 14 when he moved to Hamilton, ON. He was he was 23 years old when he made his debut for Canada on 9 February 2011.

On 30 May 2012, captain Sinclair scored the winning goal of a 1:0 home victory over China PR in the Canadian Soccer Association’s Centennial Match in Moncton, NB. Sinclair scored the winner in added time – the third added-time winning goal she has scored in the last two years (and the second against China PR). Sinclair scored the goal with the help of Diana Matheson who, on return from a layoff because of injury, set up the goal on a free kick from just outside the box. With the goal, Sinclair now has 14 goals in 12 international matches in 2012, the third highest single-season total in national teams history. Sinclair, Matheson and the national women’s team is currently preparing for the London 2012 Women’s Olympic Football Tournament in July and August.

Sinclair is in her 13th season with Canada’s national team. Taking part in her second Women’s Olympic Football Tournament, Sinclair has already represented Canada in three FIFA Women’s World Cups. The 28-year-old forward from Burnaby, BC originally made her football debut at age four with the South Burnaby Metro Club Bees. She was 16 years old when she made her debut for Canada on 12 March 2000.