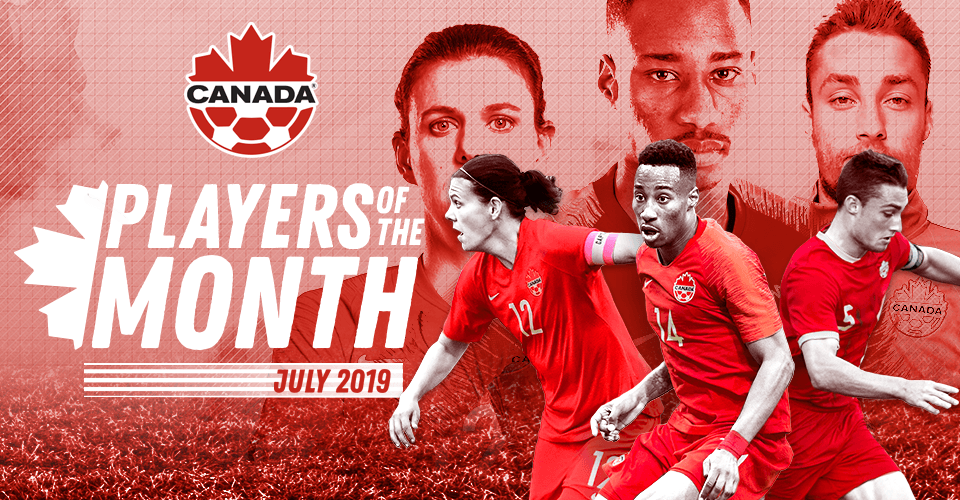 Mark-Anthony Kaye, Christine Sinclair and Samuel Charron are the Canada Soccer Players of the Month for July 2019

Mark-Anthony Kaye, Christine Sinclair and Samuel Charron are the Canada Soccer Players of the Month for July 2019

Mark-Anthony Kaye, Christine Sinclair and Samuel Charron have been named Canada Soccer’s Players of the Month for July 2019. Kaye of Los Angeles FC and Sinclair […]

Mark-Anthony Kaye, Christine Sinclair and Samuel Charron have been named Canada Soccer’s Players of the Month for July 2019. Kaye of Los Angeles FC and Sinclair of Portland Thorns FC have both excelled with their first-place teams in Major League Soccer and the National Women’s Soccer League while Para Soccer captain Charron was named Player of the Tournament at the IFCPF World Cup Sevilla 2019.

Kaye of Toronto, Ontario started all five matches after the Concacaf Gold Cup as Los Angeles FC extended their first-place lead to 10 points over second-place Philadelphia Union. Kaye scored a goal and an assist as he improved his 2019 MLS season total to four goals and six assists in 20 matches. His goal on 3 July was a left-footed rocket from just outside the box in a big 6:1 over Whitecaps FC. On 31 July, he made his first MLS All-Star Game appearance in Orlando.

Sinclair of Burnaby, British Columbia started all four matches after the FIFA Women’s World Cup France 2019™ as Portland Thorns FC moved into a one-point lead in the league standings ahead of defending champions NC Courage. She scored in three-straight matches and improved her season total to six goals in seven matches, tied for third-most goals in the NWSL. She scored on 14 July in a 4:3 win over Orlando, on 19 July in a 2:2 draw with Utah, and on 25 July in a 5:0 win over Houston.

Charron of Ottawa, Ontario was named Player of the Tournament at the 16-nation IFCPF World Cup Sevilla 2019. Charron scored six goals and one assist in six matches as Canada finished in 12th place. He was Canada’s player of the match four times, including a hat trick performance in a 4:0 win over Thailand. Still only 21 years only, Charron now has 43 goals in 49 international matches in seven-a-side Para Soccer.

Looking ahead to the Fall, Canada Soccer’s Men’s National Team will next face Cuba and USA in a four-match home-and-away group series from September through November in 2019-20 Concacaf Nations League A, starting with a home match against Cuba on Friday 7 September at BMO Field in Toronto.

Canada Soccer’s Women’s National Team, meanwhile, will prepare for the Concacaf Women’s Olympic Qualifying Tournament to be played in January/February 2020, with the exact dates and host venue still to be confirmed. The top two nations from the Concacaf tournament will qualify for the Tokyo 2020 Women’s Olympic Football Tournament.

As part of Canada Soccer’s Summer of Soccer, the Players of the Month featured has been launched to celebrate Canada’s best footballers in recognition of their outstanding performances in international and/or club football. The winners are announced via CanadaSoccer.com.