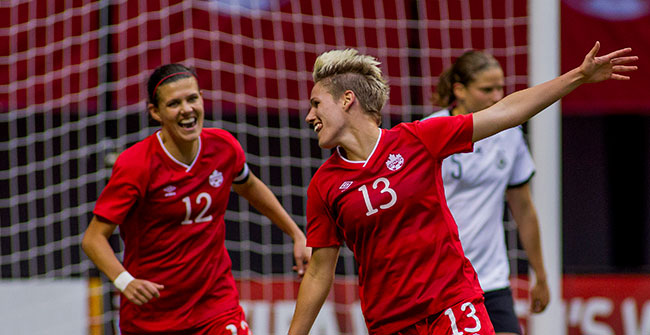 Little mistakes against Germany to be teaching points for Canada WNT

Little mistakes against Germany to be teaching points for Canada WNT

The best soccer teams in the world capitalize on their opponents’ mistakes and on Wednesday night at BC Place Stadium in Vancouver, that’s exactly what Germany did.

Germany was given an handful of chances and made the most of them as they ground out a 2:1 win over a Canadian team that’s obviously made steps since the last time they met a year ago.

They were little mistakes but they were decisive ones and with a year to iron them out before the 2015 FIFA Women’s World Cup™, it’s better they happen now than when the spotlight is really on.

“We can’t get away with that stuff and the World Cup is coming and we have to clean up our passes at the back and I’m happy those mistakes are being made now,” said defender Rhian Wilkinson. “We have time to fix it.”

Goalkeepers Karina LeBlanc and Erin McLeod split the goalkeeping duties and both of them provided some moments of top quality goalkeeping. McLeod was called upon right at the start of the second half seconds after coming in.

Where the two really showed their quality is when they provided a words of encouragement for the younger players on the field and showed the leadership qualities that they possess in spades.

With the mix of confident and seasoned youth combined with veteran experience in the fold, Canada is shaping up to be a team that will cause the big countries all kinds of headaches at the World Cup.

“A year out and a goal away from the European Champions, I’ll take that,” said Head Coach John Herdman, keeping his eyes on where the results really matter.

The players return to their respective clubs and will next see game action against the defending World Cup holders from Japan. The teams will square off in Edmonton at Commonwealth Stadium on 25 October before heading to Vancouver for another women’s international friendly on 28 October.