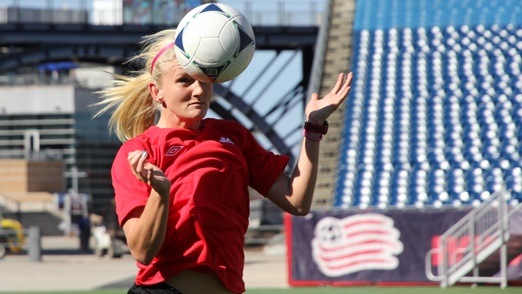 Kyle named Saskatchewan Athlete of the Year for 2012

Kyle named Saskatchewan Athlete of the Year for 2012

Canada WNT midfielder featured in all 22 matches in 2012.

Canada WNT midfielder Kaylyn Kyle has been named Saskatchewan’s 2012 Female Athlete of the year as part of the overall Saskatchewan Sport Awards.

Kyle, who was announced as the winner 13 February 2013, was a mainstay in the Canadian team during the 2012 season. The Saskatoon native featured in all 22 of Canada’s matches during the year – including all six games during the team’s bronze-medal run at the London 2012 Olympics.

The Canadian midfielder was nominated for the award by the Saskatchewan Soccer Association.

Canada WNT will next be in action when the team kicks-off the 2013 Cyprus Women’s Cup on 6 March against Switzerland in Larnaca, Cyprus.