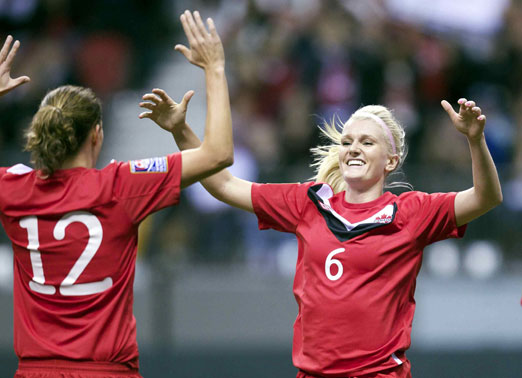 Kaylyn Kyle has made her 50th career international appearance for Canada on Thursday 1 March 2012. Kyle entered as a second-half substitution in the Canada-Italy match at the 2012 Cyprus Women’s Cup in Nicosia, Cyprus. Kyle is the 26th player to reach the milestone.

Kyle is now in her fifth season with the national team. A CONCACAF champion in 2010, she made her international “A” debut back on 16 January 2008 at age 19. Just last year, she co-led the national team with 21 starts (in all, she scored three goals and three assists in 23 matches).

In tournament play, Kyle has represented Canada at one FIFA Women’s World Cups (Germany 2011), two CONCACAF championships (including gold in 2010), and one Pan American Games (gold at Guadalajara 2011). At the youth level, she represented Canada at two FIFA U-20 Women’s World Cups (Russia 2006 and Chile 2008) and two CONCACAF Women’s Under-20 Championships (silver in 2006 and gold in 2008).

Born and raised in Saskatoon, Kyle actually got her start as a goalkeeper in the Silverwood Rangers program. By the time she was 14, she had made her debut (as a midfielder) in the Canadian youth program with coach Bryan Rosenfeld (in 2003). A graduate of the University of Saskatchewan, she was voted a Canada Soccer Fans’ Choice award winner for 2011.