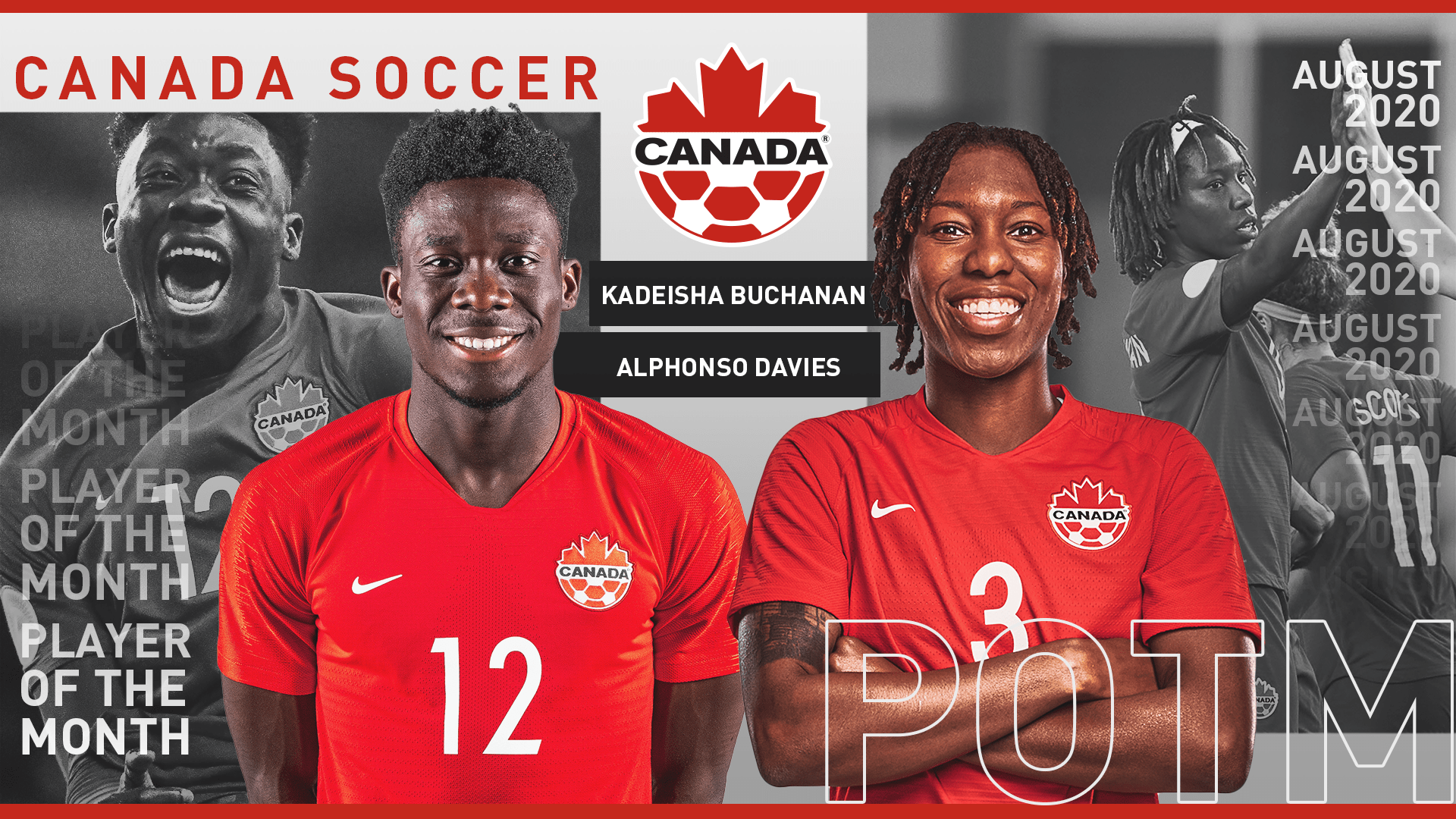 Kadeisha Buchanan and Alphonso Davies have been named Canada Soccer’s Players of the Month for August 2020. The two Canadian stars both helped their professional clubs […]

Kadeisha Buchanan and Alphonso Davies have been named Canada Soccer’s Players of the Month for August 2020. The two Canadian stars both helped their professional clubs with UEFA Champions League titles to close off the 2019-20 season, with Buchanan now a four-time winner at FCF Olympique Lyonnais and Davies now a first-time winner with FC Bayern Munich.

Buchanan is the one and only Canadian to win four European club championships, in fact all four in consecutive years since she debuted as a pro soccer player in 2017. Still only 24 years old, the two-time Canadian Player of the Year played in all seven of Olympique Lyonnais’ UEFA Women’s Champions League matches in 2019-20. In August, she played every minute at centre back as Lyon knocked off Bayern in the Quarter-finals, Paris Saint-Germain FC in the Semi-finals, and VfL Wolfsburg in the Final.

In the Final on Sunday 30 August, Buchanan was up against the top the offensive threats from the German champions, including the Bundesliga’s back-to-back scoring champions Ewa Pajor and Pernille Harder. Buchanan and teammates came out on top with a 3:1 victory, lifting the European trophy to complete their 2019-20 treble which also featured League (Championnat de France) and Cup (Coupe de France) titles.

Davies was the first Canadian soccer player to win the men’s UEFA Champions League title on Sunday 23 August. Still just 19 years old, the one-time Canadian Player of the Year played in eight UEFA Champions League matches in 2019-20. In August, he played every minute at left back as Bayern knocked off FC Barcelona in the Quarter-finals, Olympique Lyon in the Semi-finals, and Paris Saint-Germain FC in the Final.

Davies was impressive through the FC Bayern run, including a highlight-reel assist against FC Barcelona in the Quarter-finals on 14 August. With the victory over Paris Saint-Germain in the Final, Alphonso and teammates completed the 2019-20 treble which also featured League (Bundesliga) and Cup (DFB Pokal) titles.

While Buchanan and Davies won their respective finals, Jordyn Huitema and Ashley Lawrence both reached the Semi-finals of the 2019-20 UEFA Women’s Champions League in August. Lawrence, the 2019 Canadian Player of the Year, played every minute of both the Quarter-finals and Semi-finals.

With the start of the 2020-21 season, Atiba Hutchinson took part in UEFA club competition for a 15th consecutive season (a Canadian record). Hutchinson and Cyle Larin (who scored for Beşiktaş) were eliminated in the second round of UEFA Champions League Qualifying. In the same competition, goalkeeper Milan Borjan posted back-to-back clean sheets for Red Star Belgrade in the first and second rounds. For both Beşiktaş and Red Star Belgrade, Canadians Hutchinson and Borjan wore the captain’s armband.

In Major League Soccer, Jonathan Osorio made his 250th career appearance (all competitions) for Toronto FC. In Europe, Jessie Fleming made her professional debut as a substitute for Chelsea FC as they won the 2020 FA Community Shield (a 2:0 victory over Manchester City FC) on Saturday 29 August.