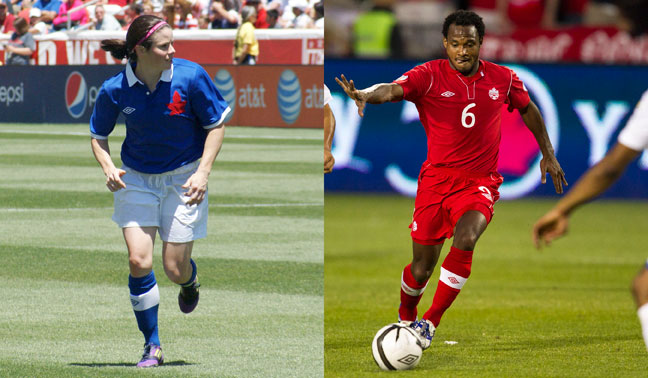 de Guzman, Matheson star for Canada at the international level

The Canadian Soccer Association is pleased to recognize Julian de Guzman and Diana Matheson as the Canada Soccer Players of the Month for June 2012.

In June 2012, Julian de Guzman was a standout for Canada in three international matches, including man-of-the-match honours in Canada’s 0:0 draw with Honduras on 12 June at BMO Field. He was a starter in all three Canada matches, the 3 June Men’s International Friendly against USA (a 0:0 draw at BMO Field), the 8 June FIFA World Cup Qualifiers match against Cuba (an away 1:0 victory in La Habana), and the 12 June FIFA World Cup Qualifiers match over Honduras. He also played in five matches for his club Toronto FC, helping his team post one win, three draws and a loss. He recorded an assist in a 3:3 draw with Houston Dynamo on 20 June.

De Guzman is in his 11th season with Canada’s national team. Taking part in his third cycle of FIFA World Cup Qualifiers, de Guzman and Canada stand in second place in Group C of the CONCACAF 3rd Round, with four more matches to be played in September and October against Panama, Cuba and Honduras. The 31-year old midfielder from Scarborough, ON originally made his football debut at age five with Wexford. He was 20 years old when he made his debut for Canada on 26 January 2002.

In June 2012, Diana Matheson was Canada’s player of the match in the 30 June Women’s International Friendly match against USA. Making her 132nd international appearance, Matheson was a catalyst throughout the match, creating several offensive chances with her play in the midfield and runs down the right side. On Canada’s second-half goal, it was Matheson who won the ball in the midfield before playing give-and-go with captain Christine Sinclair, who then fed goal scorer Melissa Tancredi down the left side. Matheson’s performance was the culmination of a month in residency camp with Canada’s national team, returning to full fitness after missing the end of 2011 and start of 2012 with an injury. In June, Matheson was also nominated to Canada’s Olympic team for the London 2012 Women’s Olympic Football Tournament.

Matheson is in her 10th season with Canada’s national team. In July, she will take part in her second Women’s Olympic Football Tournament, having already participated in three FIFA Women’s World Cups. The 28-year old midfielder from Oakville, ON orignally made her football debut as a youngster with Oakville Soccer Club. She was 18 years old when she made her debut for Canada on 18 March 2003.