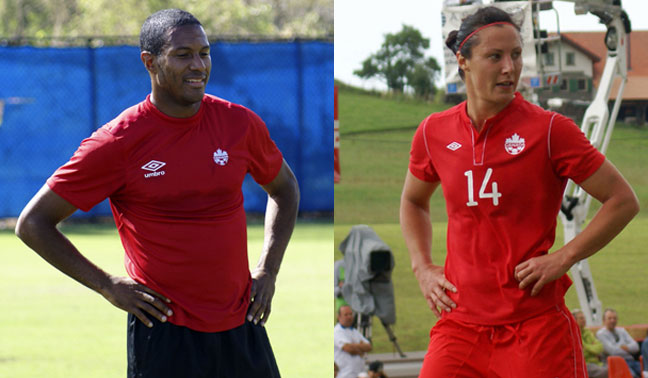 Bernier and Tancredi picked as Canada Soccer’s Players of the Month.

The Canadian Soccer Association is pleased to recognize Patrice Bernier and Melissa Tancredi as the Canada Soccer Players of the Month for July 2012.

In July 2012, Patrice Bernier was a star for Impact Montréal in Major League Soccer, scoring three times in six matches in league play. He also scored an assist in the Impact’s exhibition 1:1 draw with Olympique Lyonnais. In MLS, he played the full 90 minutes in five matches and was a substitute in another match, helping the team to a record of three wins and three losses. He scored goals in the Impact’s 1:3 loss to Sporting Kansas City, its 2:1 win over the Columbus Crew (a penalty), and its 2:1 win over the New England Revolution.

Bernier, in his first MLS season, has been a member of Canada’s national team since 2003. Late last year, he took part in his third cycle of FIFA World Cup Qualifiers. The 32-year old midfielder from Brossard, QC originally played for the Impact from 2000-2002. Already well entrenched in Canada’s national youth system, he was 24 years old when he made his international “A” debut on 15 November 2003.

In July 2012, Melissa Tancredi was Canada’s star scorer in the group phase of the London 2012 Women’s Olympic Football Tournament. Tancredi scored in three consecutive matches, with a goal in the loss against Japan, a goal in the win over South Africa, and two goals in the come-from-behind draw against Sweden. Tancredi in fact played in all six of Canada’s international matches in July, including three pre-tournament matches in Switzerland. She now has a personal-best eight goals on the season, including the tournament-leading four goals at London 2012.

Tancredi is in her ninth season with Canada’s national team. The 30-year old striker from Ancaster, ON is one of two players that has scored for Canada in each of the last six seasons (her and Christine Sinclair). She was four years old when she made her football debut in Ancaster and 22 when she made her national team debut on 26 February 2004. She has scored 22 goals in her international “A” career.