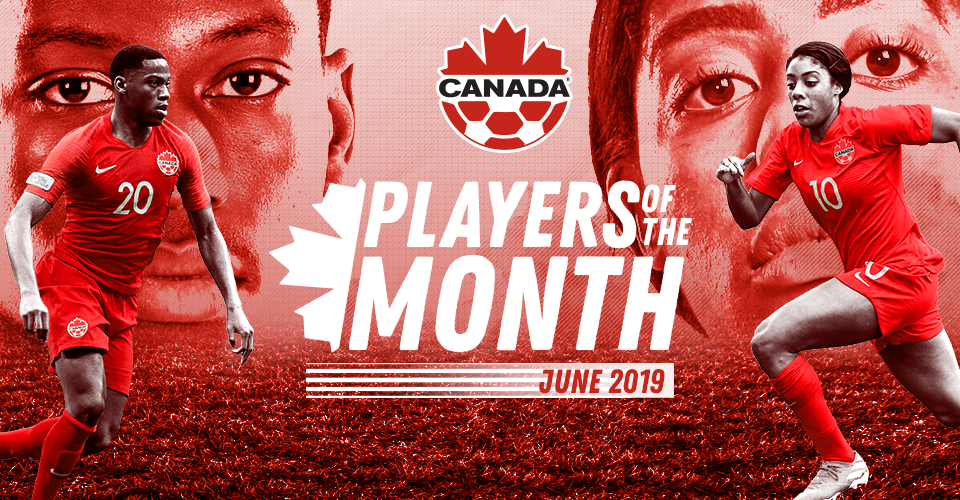 Jonathan David and Ashley Lawrence have been named Canada Soccer’s Players of the Month for June 2019. David and Lawrence both excelled for Canada as they […]

Jonathan David and Ashley Lawrence have been named Canada Soccer’s Players of the Month for June 2019. David and Lawrence both excelled for Canada as they reached the knockout stages of the 2019 Concacaf Gold Cup and FIFA Women’s World Cup France 2019™.

As part of Canada Soccer’s Summer of Soccer, the Players of the Month featured has been launched to celebrate one male and one female Canadian footballer in recognition of their outstanding performances in international and/or club football. The winners are announced via CanadaSoccer.com.

David scored a Men’s National Team record six goals at the Concacaf Gold Cup as Canada reached the Quarterfinals for the second tournament in a row. He scored two goals in the opening match against Martinique, a hat trick against Cuba, and his sixth goal of the month against Haiti. He also recorded assists on Lucas Cavallini goals against Mexico and Cuba. Already this year, both David and Cavallini have tied the Canada record for international goals scored in a calendar year (seven). From the Concacaf Gold Cup, both David and Derek Cornelius were named to the Group Stage Best XI.

Lawrence was one of Canada’s key players as they reached the Knockout Phase for just the third time at the FIFA Women’s World Cup™. She played every minute of Canada’s four matches, recorded an assist on Christine Sinclair’s goal against Netherlands, and was Canada’s player of the match in the Round of 16 against Sweden. She has been Canada’s minutes played leader in each of the last two years. Along with Lawrence, Canada’s other players of the match during the FIFA Women’s World Cup™ were Kadeisha Buchanan, Jessie Fleming, and Christine Sinclair.

Other stars in a busy summer of soccer for Canada were Cavallini and Cornelius at the Concacaf Gold Cup as well as Buchanan and Desiree Scott at the FIFA Women’s World Cup France 2019™.

Looking ahead to the Fall, Canada Soccer’s Men’s National Team will next face Cuba and USA in a four-match home-and-away group series from September through November in 2019-20 Concacaf Nations League A, starting with a home match against Cuba on Friday 7 September at BMO Field in Toronto.

Canada Soccer’s Women’s National Team, meanwhile, will prepare for the Concacaf Women’s Olympic Qualifying Tournament to be played in January/February 2020, with the exact dates and host venue still to be confirmed. The top two nations from the Concacaf tournament will qualify for the Tokyo 2020 Women’s Olympic Football Tournament.