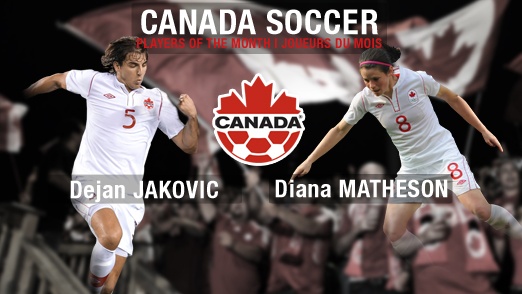 Canada Soccer is pleased to recognize Dejan Jakovic and Diana Matheson as Players of the Month for January 2013.

Jakovic played 90 minutes in both of Canada MNT’s friendlies in January, helping his team keep a clean sheet in 0:0 draw against USA on 29 January in Houston, TX.

The 27-year-old D.C. United defender won praise during the match against the Americans for his composure on the ball and the defensive leadership he demonstrated in organizing a young Canadian back line.

Diana Matheson stepped into the captain’s role for Canada WNT in the absence of Christine Sinclair, wearing the arm band for all 270 minutes of action across three matches as Canada posted a record of 1W-1D-1L at the 2013 Yongchuan Cup in Yongchuan, China.

The 28-year-old Washington Spirit midfielder was her usual tenacious self in midfield for Canada, helping a young WNT squad to a second-place finish at the Yongchuan Cup. Matheson’s passing and quality on the ball was central to Canada’s strong showing at the tournament.

Only Matheson and striker Adriana Leon played 90 minutes in all three matches in China.