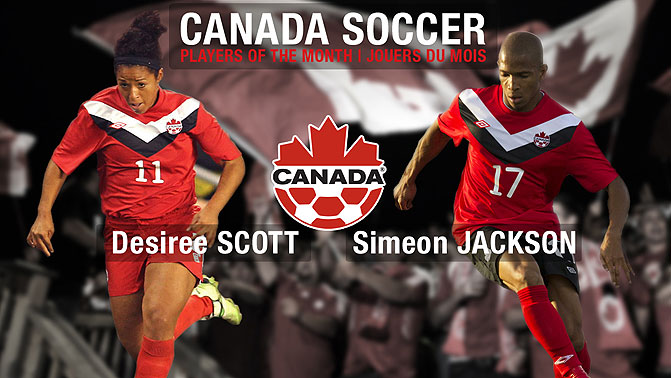 The Canadian Soccer Association is pleased to recognize Simeon Jackson and Desiree Scott as the Canada Soccer Players of the Month for January 2012.

In January, Jackson scored two goals and one assist in five appearances for English top-flight club Norwich City FC. He saw action in three Premier League matches and two FA Cup matches, with both goals scored in FA Cup victories against Burnley (a 4:1 win on 7 January) and West Brom (a 2:1 win on 28 January). Through the end of January, Norwich City stood ninth on the Premier League table with 29 points (seven wins, eight draws and seven losses). With the win over West Brom, Norwich City is now amongst the final 16 teams in the 131-year-old, 763-club competition.

Jackson is in his fifth season with Canada’s national team. Already a one-time Canadian Player of the Year award winner, Jackson has represented Canada in two cycles of FIFA World Cup Qualifiers and participated in two CONCACAF Gold Cup competitions. The 24-year old striker from Mississauga, ON originally made his football debut at age nine in the Clarkson house league program. He was 18 years old when he made his debut in the Canadian youth program.

In January, Scott was Canada’s “destroyer” in the midfield, helping Canada qualify for the London 2012 Women’s Olympic Football Tournament while earning three-straight “Player of the Match” honours. She received acclaim in back-to-back wins against Costa Rica and Mexico, the first win to secure top spot in Group A and the second win to qualify for the London 2012 Olympics. She was again selected Canada’s top player in the CONCACAF championship final, this time a loss to defending Olympic champions USA.

Scott is in her fourth season with Canada’s national team. A CONCACAF champion in 2010, she has represented Canada at one FIFA Women’s World Cup, two CONCACAF championships (gold and silver) and one Pan American Games (gold). The 24-year old midfielder from Winnipeg, MB originally made her football debut at age eight with Maples Cougars. She was 15 years old when she made her debut in the Canadian youth program.

CANADA SOCCER PLAYERS OF THE MONTH