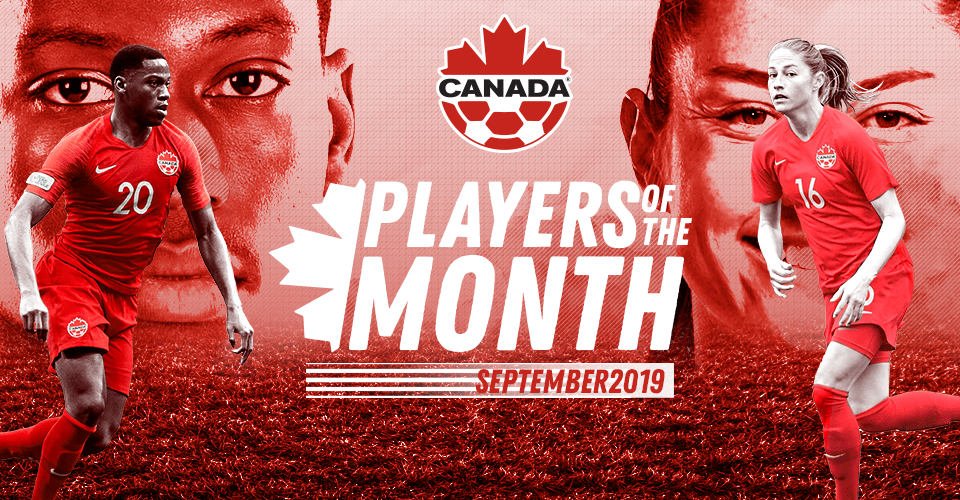 Janine Beckie and Jonathan David have been named Canada Soccer’s Players of the Month for September 2019. The two Canadian forwards excelled for their clubs during […]

Janine Beckie and Jonathan David have been named Canada Soccer’s Players of the Month for September 2019. The two Canadian forwards excelled for their clubs during the month, each scoring in European club competition with Manchester City and KAA Gent, respectively. David also scored a highlight-reel goal on home soil in a Canada victory over Cuba at BMO Field.

Beckie scored four goals in two UEFA Women’s Champions League matches as Manchester City advanced to the Round of 16. Beckie scored at both home and away, notably becoming just the second Canadian to score a hat trick in UEFA Women’s Champions League action on 25 September (a 4:0 victory over FF Lugano). In league action Beckie helped City start the season at the top of the table with three wins in September. Her play earned her a call-up to the Women’s National Team for the upcoming away international match against Japan on 6 October.

David scored twice in UEFA Europa League group action in a KAA Gent 3:2 victory over AS Saint-Étienne. He also scored four goals and two assists in four league matches in Belgium. His best goal of the month, however, was scored in Canada colours in front of home fans at BMO Field on Saturday 7 September, the second goal of a big 6:0 win in Toronto. That goal helped David set the Men’s National Team record for goals in an international season (eight goals in seven matches this year).

Canadian fans will have a chance to watch David in action again this Tuesday 15 October when Canada faces USA in a Concacaf Nations League group A match at BMO Field just after the Thanksgiving break.

At the international level, Junior Hoilett became just the second Men’s National Team player to score a hat trick in a home international match. In back-to-back victories over Cuba in Concacaf Nations League, Hoilett, David, Jonathan Osorio and Doneil Henry were the goalscorers at home while Alphonso Davies was the goalscorer in a 1:0 victory on the road. Goalkeeper Milan Borjan, meanwhile, recorded his 19th and 20thcareer clean sheets, second most in program history.