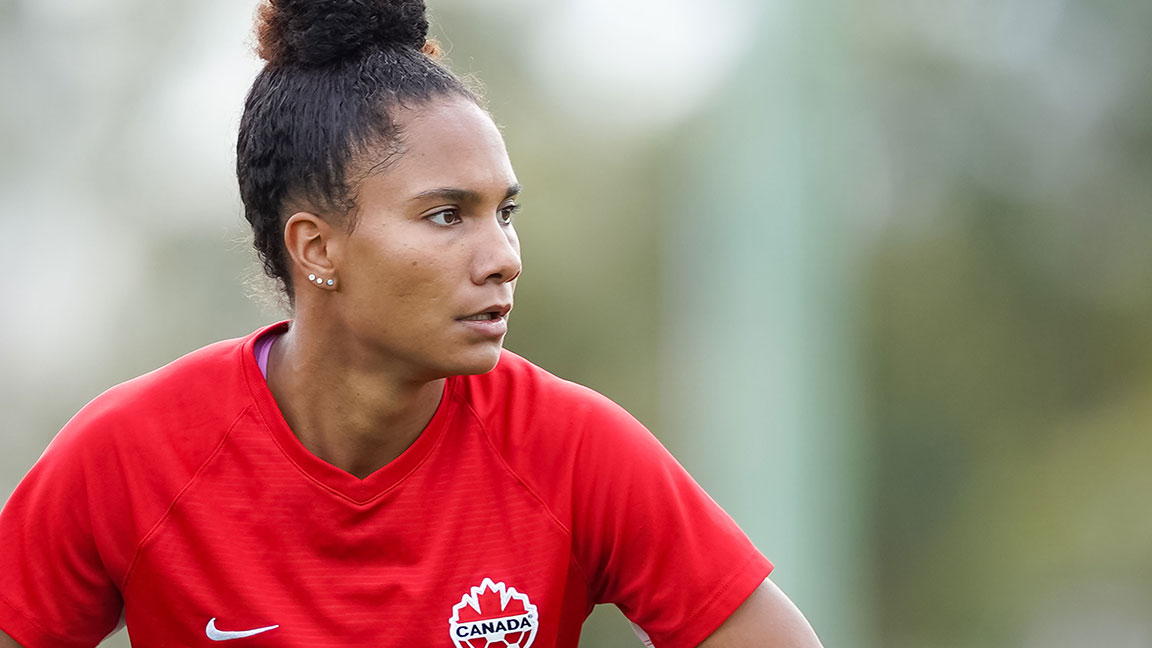 There was more than just one excellent moment when Jade Rose played Australia on Tuesday, but it was that big moment in the second half that paved the way for Canada’s come-from-behind 2:1 away victory in Sydney. Shortly after the hour mark with both sides tied 1-1, the teenaged centre back collected the ball in her own end, raced forward with half a dozen touches, and played a perfect through ball that sent Adriana Leon in for the winner.

Leon made no mistake with her left-footed shot or her celebration, helping to congratulate the young Rose who earned his first assist in just her third international “A” appearance.

The veteran Leon scored both Canada goals in the victory (and in fact all three in the series), but it was Rose at the back that stood out as a formidable force helping to shut down Australian star striker Sam Kerr for most of the night. On the attack, Rose nearly put Nichelle Prince through on a breakaway in the 53rd minute, but then made no mistake with her pass for the Leon winner in the 64th minute.

“I saw the pressure on my left side, so I didn’t really want to play it back to (goalkeeper) Kailen Sheridan with that pressure,” said Rose of her match-winning assist. “I took my chances on the turn and no one was stepping to press me, so I just kept pushing forward and saw Adriana making the run across the line and I put it through.”

Canada won both of their matches in the September window against Australia, a 1:0 victory on Saturday 3 September and the 2:1 victory on Tuesday 6 September. They were Canada’s first two international matches since the Concacaf W Championship as the squad now focuses squarely on the FIFA Women’s World Cup Australia & New Zealand 2023. Rose, who wasn’t at the Concacaf W Championship but instead comes fresh from her experience at the FIFA U-20 Women’s World Cup Costa Rica 2022, got her chance to impress the Canada boss in the Tuesday match.

“It was really pleasing to see Jade step in and live her identity at that level and against someone as good as Sam Kerr,” said Bev Priestman, Canada Soccer’s Women’s National Team Head Coach. “She has a really bright future and our program has been excited for her and has invested in her for quite some time. When her moment came against Australia, she grabbed it with both hands.”

“She’s always been very consistent in her willingness to be tactically excellent,” said Cindy Tye, Canada Soccer’s Women’s U-20 National Team Coach. “She’s a student and she asks great questions. She’s a phenomenal athlete. She’s got pace, she’s got size, and technically she’s composed on the ball. We saw it (in that match) with the Women’s National Team and we saw it at the FIFA U-20 Women’s World Cup. Those skill sets will help her at the international level.”

With her graduation this year from the youth program, Rose now looks forward to continuing her growth to excellence on the road to the FIFA Women’s World Cup Australia & New Zealand 2023.

“Before coming into this camp, I was playing with the U-20s against world-class opposition,” said Rose. “I’m taking advantage of every international window, whether that’s in the youth program or with the Women’s National Team. I don’t think words can describe the amount of motivation it provides me seeing that there is a potential for the FIFA World Cup in the future. I think that it’s going to push me to work on the little things each and every day.”