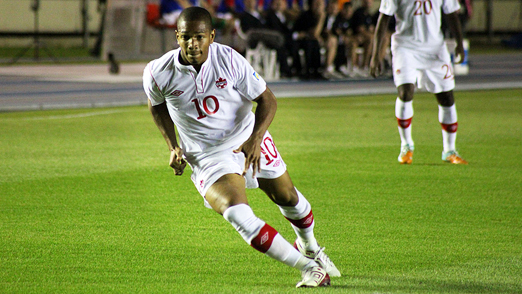 Jackson: We’re where we want to be

Jackson: We’re where we want to be

“If you asked us before the competition got underway, we would have bit your hand off for this,” said Simeon Jackson about Canada’s current position in qualifying for the FIFA World Cup™, one game and one point away from the final hexagonal round. “We are exactly where we want to be.”

Jackson is something of an authority on getting where he wants to be. Born in sunny Kingston, Jamaica, he moved to the frosty suburbs of Toronto at age three with his family. He excelled at football. Failed early trials in England’s lower leagues didn’t slow the young Jackson down, it steeled his resolve, in fact. He moved in with his grandmother in South London and battled away in non-league football before moving all the way up the chain, with a preternatural perseverance, to the top flight, the Promised Land, the English Premier League, where he lines up for modest outfit Norwich City.

“I started from nothing, from scratch, I can tell you that much,” Jackson, a pacey striker who can play as an out-an-out No9 or drop back into the hole, told FIFA.com. “I worked my way up the from bottom,” he admitted, with a touch of modesty. “I’m very proud of where I’ve ended up; it was a long and hard road.

“There were a lot of times, more than I can say in the time we have, when I was ready to throw in the towel and go back to Canada,” he added. “One time I remember, I was released from Gillingham and I was nowhere, there was no future. I was gutted, but my family wouldn’t let me stop, they wouldn’t let me give up on my dream.”

Jackson worked behind the counter at a local McDonald’s in Croydon while he ground it out on the semi-pro circuit, until, in 2008, he was signed on a professional contract by Gillingham, one of the very same clubs that slammed the door in his face when he was a teenager. The striker helped guide them back up to the Football League. In 2010, aged 23, he was on the move again, this time to Norwich City, a club in the midst of its own meteoric rise, and he, fittingly, scored the goal that sent them into the Premier League.

“It’s hard to describe,” he said, trying to relate what it feels like to play at Anfield, at Old Trafford and all those cathedrals of football after his hard-scrabble beginnings. “The glamour, the big stadiums, the crowds, it makes you appreciate the little things on the way up even more. I had to work for everything I got, and I am a grateful man.”

Now with 32 appearances and six goals to his name for Canada, the lively and likable Jackson is hoping to take another step up the ladder. “Now I want to achieve success on the international stage,” he said.

A point in San Pedro Sula
After beating Cuba 3:0 on Friday 12 October, the Canadians – who last qualified for a world finals back in 1986 – need a win or a draw in their final game on the road in Honduras to book their place in the final, six-team round of CONCACAF qualifying.

“We’ve done well just to get to this stage,” said Jackson, voted Canada’s player of the year in 2009. “We’ve gone to some tough places and come away with results. We just need to keep fighting like we have done, because that’s why we are where we are.

While the Canadians have done well, they have not exactly been clinical in front of goal, scoring only five goals in five games (with three coming in that win against an understrength, eliminated and demoralised Cuba). “It’s true, we haven’t scored very many, but we’ve made a lot of chances and get into good positions, so when you do that, things have a tendency of going your way,” added Jackson, who has yet to hit the net in the semi-final round.

“We just need to get the job done,” Jackson added, a seriousness edging into his voice. “We’ve got some momentum and pride and the time is now to show what we’re all about.”