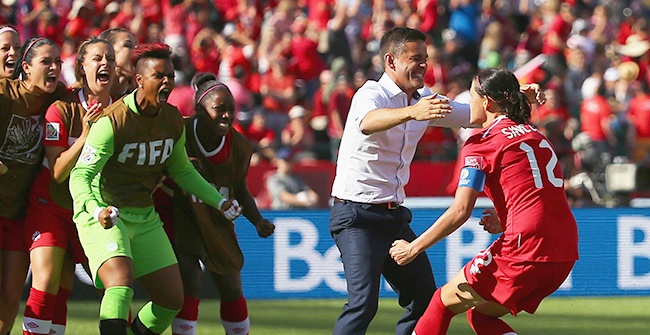 In extremis goal by Sinclair leads Canada to victory

In extremis goal by Sinclair leads Canada to victory

Win over China PR in the dying minutes of the Opening Match at the FIFA Women’s World Cup Canada 2015™ in front of 53,058 fans at Commonwealth Stadium

It wasn’t an easy one but Canada can call it job done as they secured a 1:0 win over China PR in the dying minutes of the Opening Match at the FIFA Women’s World Cup Canada 2015™ in front of 53,058 fans at Commonwealth Stadium in Edmonton, AB.

Canada started strong, controlling the ball and managing to break through to the Chinese goal a few times in the first 15 minutes. But China tightened their play and frustration settled in the Canadian squad, who allowed their opponent a handful of chances, notably a free kick that ricocheted off of McLeod’s goalposts twice.

It took over 90 minutes for Canada to find the back of the net, and it came on a kick from the penalty mark in the added time after Adriana Leon got fouled inside the box by Zhao Rong. The Canadian captain Christine Sinclair walked up to the spot, in the calm and collected way she’s known for, and precisely directed the ball in the bottom left corner, just passed the Chinese keeper’s reach.

“It was an amazing atmosphere to go out and play this opening match of the World Cup in front of 50,00+ fans,” commented Sophie Schmidt, who was selected and Canada’s Player of the Match by the FIFA Technical Study Group. “The Chinese sat back and challenged us to come at them, and finally something went our way. Then Sincy [Sinclair], Oh Captain my Captain, came through and I’m just glad she put that in.”

In the end, Canada walked away with the 1:0 win and can say they accomplished what they set out to do in this first match.

“Good start for Canada, three points in the bag, exactly where we want to be,” said Head Coach John Herdman in his post-match press conference.

“I think it was a good start to the tournament for Canada, we double the possession on China, outshot them, and only five years ago Canada would have been defending in a deep block against the Chinese who were arguably some of the best tacticians in the world,” added Herdman.

Canada will now turn its attention to the second match of the group phase this Thursday, where it will face New Zealand in what is sure to be another story in itself given Head Coach John Herdman’s history with the program. The Canada-New Zealand match is scheduled for 11 June at 19.00 local time (21.00 ET / 18.00 PT) from Commonwealth Stadium in Edmonton.

The Canadian squad will then travel to Montreal for the last match of the group phase, against the Netherlands, on 15 June. Tickets for both of Canada’s upcoming matches are still available at fifa.com/canada2015.