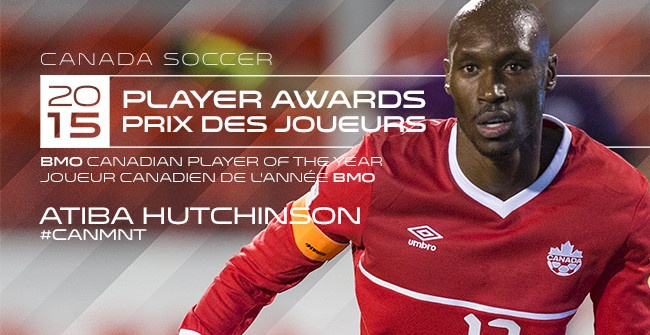 Canada Soccer announced that Atiba Hutchinson is the male selection for the 2015 BMO Canadian Players of the Year award. The Canadian midfielder from Brampton, ON was honoured from a vote shared by Canadian media (50%) and Canadian coaches (50%).

Hutchinson shares the 2015 BMO Canadian Players of the Year award with Kadeisha Buchanan, the female selection who was announced one day earlier.

“Atiba continues to excel as one of Canada’s great footballers in the world’s biggest sport, as witnessed in our memorable November home win at BC Place in the 2018 FIFA World Cup Russia Qualifiers,” said Victor Montagliani, Canada Soccer President. “As a four-time winner of this award, he ranks amongst Canada’s best athletes. We congratulate him, his family, his teammates, and all the coaches that have helped him shine as a footballer.”

“We’re thrilled for Atiba Hutchinson, this year’s winner of the BMO Canadians Player of the Year award, for his leadership both on and off the soccer field,” said Connie Stefankiewicz, Chief Marketing Officer, BMO Financial Group. “Atiba exemplifies the spirit of soccer and sport that we foster and celebrate at BMO.”

At the international level, Hutchinson played in four 2018 FIFA World Cup Russia Qualifiers, first helping Canada eliminate Belize in CONCACAF Round 3, then helping Canada win four points in the first two matches of CONCACAF Round 4. At home, he scored a goal in a 3:0 win over Belize on 4 September, then earned man-of-the-match honours in an important 1:0 win over Honduras on 13 November.

At the club level, Hutchinson helped Besiktas finished third in the 2014-15 Turkish Süper Lig standings and qualify for UEFA Europa League. In the second half of calendar year, Hutchinson has helped keep Besiktas at the top of the 2015-16 Süper Lig standings since early October. In Europa League action, the club missed escaping the group phase by just a single point.

“We are very proud of Atiba Hutchinson,” said Benito Floro, Canada Soccer’s Men’s National Team Head Coach. “He is the player that coaches and teammates want to have around. Full congratulations to him and his family.”