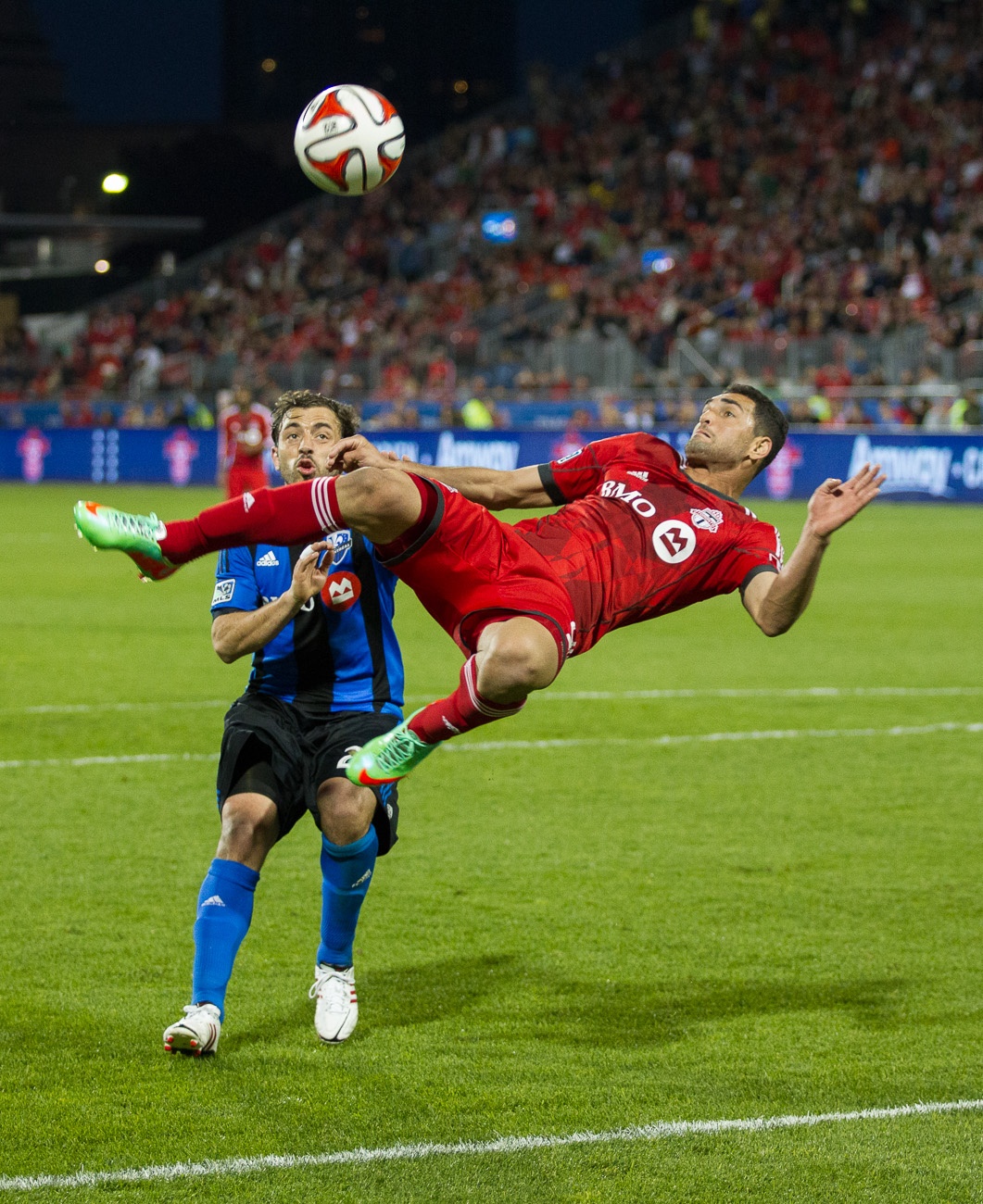 There will be plenty to play for next week in Montreal after first leg of the Amway Canadian Championship final between Toronto FC and the Montreal Impact ended in a 1:1 draw, the goals coming courtesy of Doneil Henry and Justin Mapp in each half, respectively.

There will be plenty to play for next week in Montreal after first leg of the Amway Canadian Championship final between Toronto FC and the Montreal Impact ended in a 1:1 draw, the goals coming courtesy of Doneil Henry and Justin Mapp in each half, respectively.

Henry’s gorgeous header off a corner kick gave the Reds the lead at half time, but the Montreal Impact managed to find an equalizer in the second half, as well as a crucial away goal, thanks to Mapps’s stunning 73rd-minute strike

Both teams came out battling for a spot in the 2014-15 CONCACAF Champions League with near-full strength lineups, but the first half had barely started when Montreal had to make a change. Nelson Rivas came off in the second minute and went straight for the locker room, with Wandrille Lefevre coming in in his place.

It took 20 minutes for Toronto FC to open their account after a strong opening to the game but Henry got up above a crowd of playesr to get a head on a Daniel Lovitz corner kick and put it away with power, to put his team in the lead.

And though the first half produced just the one goal, it was by no means a dull 45 minutes. Toronto FC created plenty of chances and took four shots, while the Montreal Impact defended well, holding off Gilberto and Dwayne De Rosario in their defensive end.

The excitement wasn’t limited to the teams’ attacking play, either, as the rivalry between the two sides was plenty evident when Alvaro Rey picked up a yellow card in the 35th minute. After furiously reacting to what he felt should have been a penalty call, he shoved Montreal’s Hassoun Camara to the ground after the French defender pestered the referee to show a yellow card for diving, in the process earning the booking Camara wanted.

It was just one of 15 fouls in the first half between the two rival sides.

At the half, Jack McInerney came into the game for Felipe as Montreal tried for an equalizing goal in the second half. Try as Montreal might though, they couldn’t find a good chance on net.

De Rosario did, though, in the 58th minute, nearly beating Impact ‘keeper Evan Bush with a shot outside the box that hit the crossbar, then the keeper’s back, before going out for a corner.

Montreal nearly found its chance in the 68th minute when TFC captain Steven Caldwell looked to have handled the ball in the box, but the referee didn’t award a penalty.

The Impact wouldn’t miss the next opportunity though, as Mapp picked up the ball in midfield, pushed forward and beat Joe Bendik with a well placed, curling shot in the 73rd minute of play to bring the score level.

Toronto and Montreal would continue to trade chances in the closing stages of the game, with De Rosario firing high from a free kick after Gilberto was brought down trying to break through on goal minutes before Di Vaio floated a header past Bendik’s far post. De Rosario then nearly did the same in the last minute of the game.

Montreal walked away the happier of the two teams, grabbing a crucial away goal before the teams head back home in Montreal, QC next Wednesday to conclude their battle for the Voyageurs Cup and a berth in a CONCACAF Champions League group containing the New York Red Bulls and El Salvador’s CD FAS.