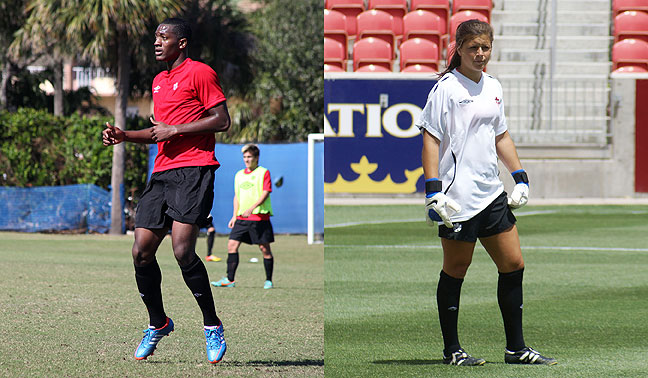 Henry, D’Angelo named 2012 Canadian U-20 Players of the Year

Henry, D’Angelo named 2012 Canadian U-20 Players of the Year

Canadian teenagers Doneil Henry and Sabrina D’Angelo have been named Canadian U-20 Players of the Year for the 2012 soccer season. The two stars were honoured in a vote shared by national-team coaches (50%) and other Canadian coaches (50%).

Henry is a member of Canada’s men’s U-20 team, having taken part in two national U-20 camps in 2012. He also took part in one men’s national camp (he made his international “A” debut on 15 August 2012) and helped Canada’s U-23 team come within a win of qualifying for the London 2012 Olympics. On 24 March at the CONCACAF Men’s Olympic Qualifying Tournament, he scored the opening goal of a 2:0 win over USA.

“Doneil should be proud of being recognised a Canadian U-20 Player of the Year,” said Nick Dasovic, Canada’s men’s U-20 coach. “I have seen him mature as a player and as a person on and off the field. His hard work, dedication and passion have been a driving force in helping him achieve this award. I wish him all the very best in achieving his ultimate dreams.”

D’Angelo was goalkeeper of Canada’s women’s U-20 team, helping Canada qualify for the FIFA U-20 Women’s World Cup. In March, she helped Canada win a silver medal at the CONCACAF Women’s Under-20 Championship in Panama. She earned Canada’s Player of the Match honours in the 1:0 group finale victory over Mexico. In all, she posted six clean sheets in 2012, including a 6:0 win over Argentina at the FIFA U-20 Women’s World Cup Japan 2012.

D’Angelo of Welland, ON also earned two call-ups to Canada’s national “A” team in 2012. At the college level with University of South Carolina, she started 14 matches and posted three clean sheets. She also earned Second Team All-SEC honours.

“Sabrina couldn’t be more deserving of this honour,” said Andrew Olivier, Canada’s women’s U-20 coach. “Her performances throughout the CONCACAF Championship and FIFA U-20 Women’s World Cup speak for themselves. The composure and consistency she continously showed were those of a mature goalkeeper beyond her years, so her inclusion in the national “A” team environment didn’t come as a surprise. I would like to wish her much success in the next steps of her career.”