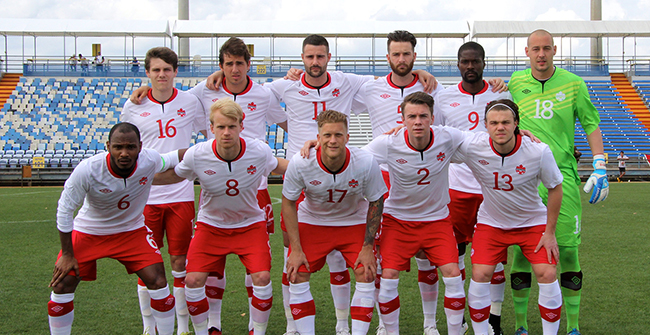 Canada MNT got their first win of 2015 thanks largely to their burgeoning mastery of set-piece situations.

While the conditions were hardly ideal on Friday at Lockhart Stadium in Fort Lauderdale, Florida, Canada’s Men’s National Team got their first win of 2015 thanks largely to their burgeoning mastery of set-piece situations.

Marcus Haber’s second goal for Canada at the senior level came as he headed in a Kyle Bekker corner kick in the 11th minute on a day when creativity was hampered with strongly gusting winds made things complicated for both teams.

“It was a very good game for us because the wind favoured us in the first half and the players really didn’t know how to handle that,” said Head Coach Benito Floro. “So we got the goal on a corner kick but we didn’t play well except for only 10 minutes in the first half. In the second half, when we were going into the wind, I think the team played very well.”

Much of Canada’s scoring with Floro in charge has come either directly from corner kicks or free kicks but as long as the goals keep going in and Canada can pick up the result in complicated conditions like Friday’s, that’s all that matters.

With Floro in charge, Canada remains unbeaten against CONCACAF opposition with two wins and a draw in three games played.

It’s the final camp for Canada before competitive games take place in the form of World Cup Qualifiers and the CONCACAF Gold Cup, so any good result against the teams you’re tested against is a reason for encouragement.

“We’re getting up to the real thing with the Gold Cup and World Cup qualifiers so it’s important we get some results and everyone’s happy for sure,” said Haber.

“This gives us confidence. We feel good as a team and we’ve got good depth and players that can contribute all over the park and the players that came off the bench gave us a lift in these conditions.”