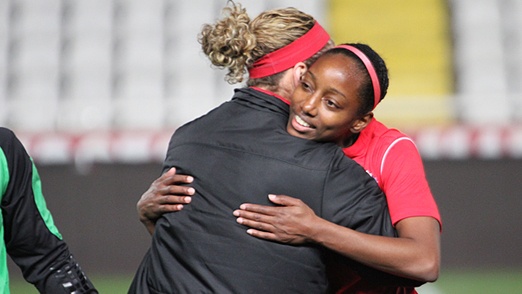 Gayle the hero as Canada stays top of Group B

Gayle the hero as Canada stays top of Group B

Canada stayed atop Group B at the 2012 Cyprus Women’s Cup after a dramatic 2:1 win over Italy in Nicosia, Cyprus. Canada maintains first place in Group B with six points, with both Netherlands and Scotland chasing the lead with three points each. Italy sits in last place after back-to-back losses.

France and England stand one-two in the opposite group, with France holding the lead based on goal differential. Both France and England have won six points each, with a head-to-head match up set for the last group match day on 4 March. Finland and Switzerland will face each other for third place, with Finland holding the lead on goal differential.

Canada’s last group opponent is Netherlands on 4 March. Canada needs but a draw to secure first place and earn a spot in the championship final, which would be against the winner of the opposite group (either France or England). Also on 4 March, Scotland faces winless Italy.

In the Canadian win on 1 March, Christine Sinclair and Robyn Gayle scored for Canada while Sandy Iannella scored for Italy.

As for Group C, Korea Republic won 1:0 over Northern Ireland while South Africa and New Zealand drew 0:0. Korea Republic leads the group with six points. The top-two finishers in Group C will meet the fourth-place teams of Groups A and B in either the 7th/8th-place match or 9th/10th-place match on 6 March.

“John (Herdman) gave me the nudge to go forward,” said Gayle after the game.

“I just kept my run going, Kaylyn Kyle kind of set a nice pick for me and I just placed it in.”

Canada competes in the fifth edition of the Cyprus Women’s Cup from 28 February to 6 March. Canada’s next match is set for 4 March (14.30 local kick-off) against the Netherlands in Larnaka, Cyprus. Throughout the 2012 Cyprus Women’s Cup, fans will be able to track the progress of the Canadian team in Cyprus via CanadaSoccer.com, as well as social media platforms on Twitter @CanadaSoccerEN, Facebook, Flickr and CanadaSoccerTV.