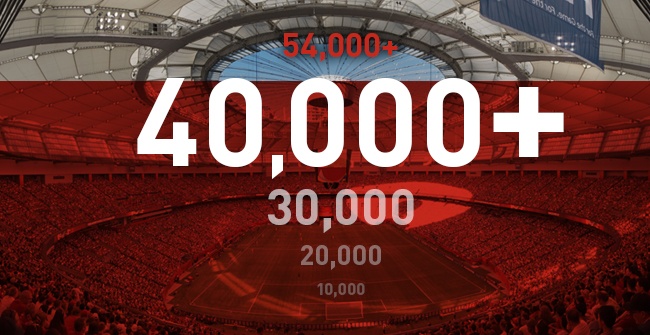 The upper bowl end zones have been opened with new seats available for as low as $15 each.

The tide of #CanadaRED support‎ continues to rise as yet another Canada Soccer milestone has been surpassed ahead of this month’s 2018 FIFA World Cup Russia™ Qualifiers in Vancouver.

With more than 40,000 spectators booked for the Friday 25 March match at BC Place, the upper bowl end zones have been opened with new seats available for as low as $15 each.

Already, the Canada-Mexico battle will mark the largest attendance for a FIFA World Cup™ Qualifiers match ever hosted in Canada. Canada Soccer is calling out for additional #CanadaRED support, with tickets to the crucial encounter available online via www.canadasoccer.com/tickets.

With a big crowd, fans are encouraged to arrive early on match day with the BC Place gates open at 5pm (17.00 local), a full two hours before the 19.00 kickoff to ensure that all fans are able to safely and efficiently make their way to their seats.

As always, Canada Soccer’s Men’s National Team is calling on all fans to wear red as we create a sea of #CanadaRED support in the stadium and across the country. Fans looking to pick up official Canada Soccer merchandise will find a number of retail locations within the stadium.

A special pre-match Fan Fest on the Terry Fox Plaza will welcome fans to the #CanadaRED party, featuring exciting activations, a number of fan giveaways, and a live DJ.

For fans riding to the match, the Bicycle Valet will be operational at Gate C.

SUPPORT #CANADARED, BE CANADA’S 12th MAN
The Canada-Mexico match promises an unforgettable atmosphere. With the lower bowl already full, upper bowl seating is available to fans starting as low as $15 in the newly opened end zone seats (plus applicable fees). The popular ‘Me+3’ offer will remain available in select sections, available directly via Tickmaster.ca by selecting the ‘Me+3’ offer.

Group discounts will continue to be offered, with groups of 10 or more eligible to receive discounts of up to 30% off regularly priced sections. Group tickets will be processed on a first come, first served basis, for complete information and to submit a request for tickets visit the group ticket section on www.canadasoccer.com/tickets.

Canadian fans interested in travelling to Mexico to support Canada’s Men’s National Team at Azteca are encouraged to check out the custom travel package which is being offered by The Supporters Section Sports Travel. For more information, visit https://www.thesupporterssection.com/event/canada-at-mexico-world-cup-qualifying/.