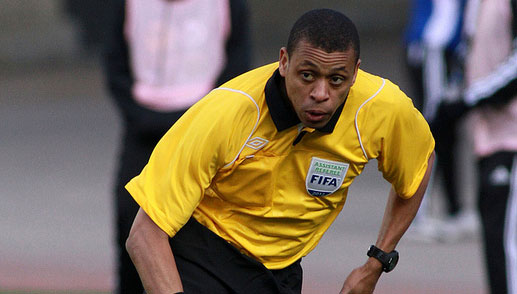 This annual tournament begins on 11 Dec and will run for 10 days. During this time, the best club teams from each confederation, including European titleholders FC Bayern München and South America’s Atletico Mineiro, will square off to determine the world champion. Matches will take place in Agadir and Marrakech, the two-host cities.

Fletcher will be departing for the tournament on 3 Dec for fitness testing and pre-tournament preparation.

However, this is more than just another tournament “it’s an audition,” says Fletcher, who is under consideration for the 2014 FIFA World Cup list. With only eight games to be played and five referees squads attending the tournament, Fletcher and his crew may only get one chance to impress FIFA and ensure their place in Brazil.

Fletcher welcomes the challenge. “There is just something about the game that drives me” he says, “in fact, it’s a near addiction.”

“I’m a goal oriented type of person. I know what I’m up against and even though perfection doesn’t exist, I desire excellence.” What matters to Fletcher is making the correct call. “I have so much to focus on that blocking out the fans is easy, they’re just part of the atmosphere; what matters is being right when the replay comes.”

While the primary referee will make the majority of the calls, there is more to Fletcher’s job than handling off-sides. “I’m there to assist whenever the referee’s view is blocked, and ensure that the correct decisions are made. After all, we succeed and fail as a team.”

And in Morocco, Fletcher and his crew will be deploying goal-line technology, for the first time in the events history. “It will help,” says Fletcher, “but it doesn’t remove the human element. I like it because it keeps the passion in the game, while bolstering our ability to make those clear cut decisions.”

Fletcher’s own passion for the game started at a young age. Fed, in part, by his parents, and the exploits of his first cousin, Kyle Fletcher, who played for Canada’s U-20 National Team.

“I just can’t remember when I wasn’t involved in the game on some level,” says Fletcher. His travels, as a FIFA referee, have now taken him around the world. In 2012 he officiated a match at Old Trafford, as part of the London Olympics. But even better was the FIFA U-20 World Cup final between Brazil and Portugal in Bogota, Colombia.

Fletcher will never forget this day, in August 2011. “It was a thrill. There was such unbridled passion in the stands. After the match my crew and I went up on stage to receive medals from FIFA’s President, Sepp Blatter.”

Moments like this says Fetcher “are part of why it’s an honour to wear the FIFA badge and why I hope I can keep going and continue refereeing for as long as I can.”