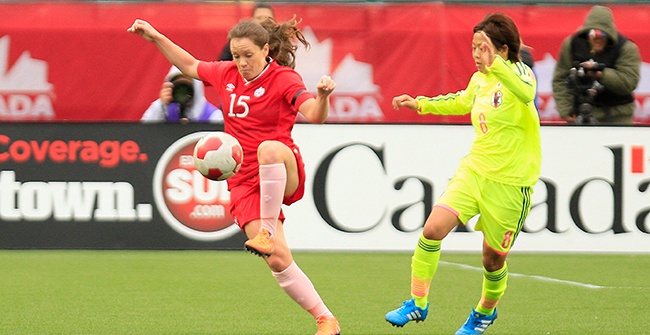 Having only just gotten the full squad back together and with eight months until next summer’s FIFA Women’s World Cup Canada 2015™, Saturday’s women’s international friendly was always going to serve as a baseline for Canada’s women’s national team.

A 3:0 loss to the defending World Cup holders showed that Canada can hang in with the champions but the littlest of mistakes will be exploited.

“It was a bit rough,” admitted Head Coach John Herdman. “With the Japanese, as soon as you give them an inch, they take a yard with that quality that they have. In the first ten minutes we struggled to keep up with them—with their pace of the movement and the pace of the game.”

But after that initial spell where Canada conceded a goal, they responded well and, in many cases, were matching the Japanese blow for blow heading into the halftime break. Canada managed to create a few chances and know they’ll have to bury the chances they get against the best in the world because they won’t come too often.

When the teams played at the Olympics, a narrow 2:1 scoreline masked a Japanese performance that was more dominant than it was on Saturday. And the team knows that in the coming months they’ll be working hard to learn these lessons.

Those good periods are a glimpse of what can be built on over the winter and into 2015.

“Once we got a hold of it we actually showed what our potential is for that World Cup,” said Herdman. “For 30 or 40 minutes there in that first half there was a really solid showing by Canada.”

The team travels to Vancouver on Sunday and will get a quick chance to fix some of the things they need to work on as the two teams will play again Tuesday evening at BC Place Stadium.