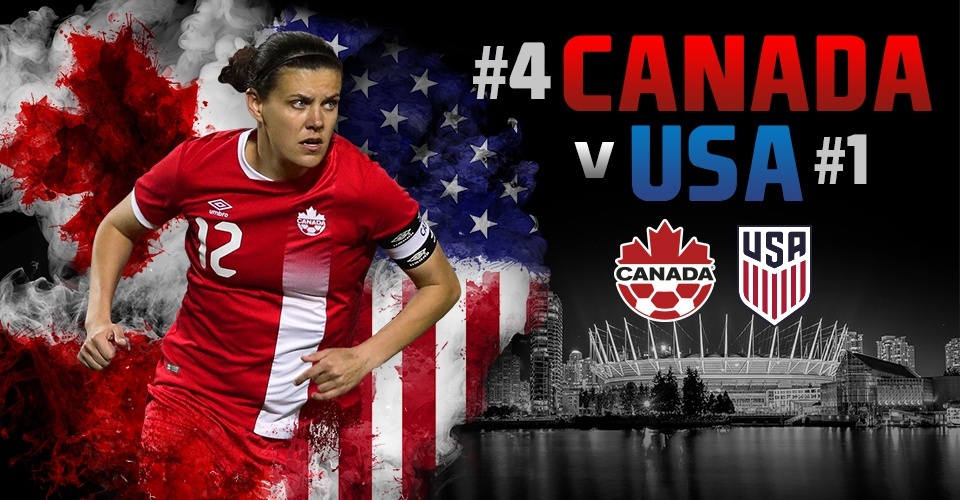 It will be a clash between arch rivals when Canada hosts USA at BC Place at 19:00 PT (22:00 ET) on 9 November in the first of two matches between the North American foes, with a second match set for 12 November in the USA.  With Canada determined to reach the top of the FIFA world rankings, the battle between the world’s top ranked USA and fourth ranked Canada will be must-see matches.  Individual tickets for the match in Vancouver go on sale 5 July at 10:00 PT (13:00 ET) via Ticketmaster.ca and group tickets are available now.  Additionally, the matches will be available to viewers on TSN and RDS.
Most Canadians will remember the epic battle between the two teams at the London 2012 Olympics, a memorable moment that put Canada Soccer’s Women’s National Team firmly in the upper echelons of Canadian sports, and the rivalry endures as the CONCACAF opponents continue to face off in FIFA Women’s World Cup and Olympic Qualification cycles.
“There is always a friendly rivalry with the USA and it’s also hard to forget London 2012 – that memory sticks with you,” said Head Coach John Herdman. “But what this match offers us, at near the beginning of our four-year cycle, is a chance to get another true tier one test with a young team. By the end of this year we will have played the Olympic Gold and Silver Medallists and the world’s number one team, so this match will really give us a good indication of where our gaps are, two and three years out from the FIFA Women’s World Cup France 2019 and Tokyo 2020 Olympics.”
Canada’ last win against the USA was in 2001, but that statistic doesn’t reflect the reality of the competition these two teams bring to the pitch. Herdman’s first game with Canada was a 1-1 draw against the USA in September 2011.  The last two encounters resulted in another 1-1 draw in Winnipeg in front of 28,255, and a 2-0 loss in the final of the CONCACAF Olympic Qualifier in 2016.   Canada went on to win bronze in Rio 2016, while the USA bowed out in the quarterfinals.
“It’s a good opportunity for this new generation, including Fleming, Lawrence, Buchanan and young Huitema, who have not experienced the USA too often in their international careers, to go out with a fresh perspective and positive mindset,” said Herdman. “We are only three spots back from them, with three close matches in our recent history, and these players have been accustomed to accustomed to success. It’s exciting.”
With the depth of the Canadian side now offering increased striking and goal scoring ability, including from teenagers Fleming, Huitema and Rose, Canada’s attacking potential has given rise to great hope for the squad’s future.
“We’ve put a lot of hard work into developing our National and Regional EXCEL system to ensure players are getting the consistent development opportunities required to create the kinds of players we will need now, and into the future,” said Herdman.  “When you don’t always have to rely on Christine, that’s crucial for this team and Christine can trust her teammates to step up for her, as well.”
For captain Christine Sinclair, the top women’s goal scorer still active in International soccer (just behind retired USA’s Abby Wambach by a mere 16 goals), becoming number one is goal that is realistic and within Canada’s grasp.
“When I was a rookie it would have been hard for me to say at 16 years old that we want Canada to be number one because that was not realistic, but that’s what we are driving towards now and it’s completely realistic and within our grasp,” she said. “Obviously, I have always wanted this team to improve on the world stage and to be able to say we want to be number one is something I never thought would be possible, but now it is.”
Group tickets on sale NOW
Group discounts (10+ tickets) are available for this match, by organizing a group of 10 or more, you are eligible to receive a discount of up to 30% off regular priced tickets. The group ticket order window will open on Thursday, 29 June, all completed group ticket payment forms received by Tuesday, 4 July will be processed in advance of the launch of public tickets sales.
Individual tickets will go on sale at 10:00 PT (13:00 ET) 5 July via Ticketmaster, with a special pre-sale window for #CanadaRED subscribers beginning 4 July at 10:00 PT (13:00 ET).  To subscribe, sign up at CanadaSoccer.com.
For complete ticket and match information, visit canadasoccer.com/tickets.