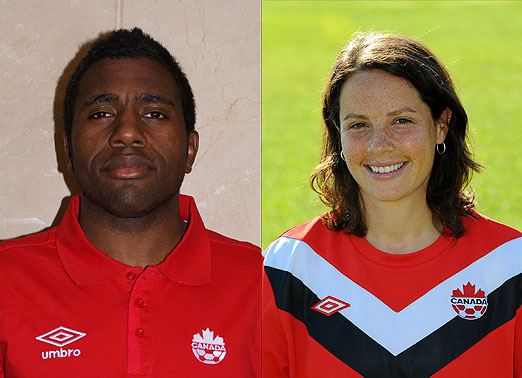 The Canadian Soccer Association is pleased to recognize Olivier Occean and Rhian Wilkinson as the Canada Soccer Players of the Month for February 2012.

In February, Occean scored two goals in five matches, one in league competition and one in cup competition for SpVgg Greuther Fürth in Germany. He played every minute of four league matches in the 2.Bundelisga, helping the “cloverleaf” post two wins, one draw and one loss to maintain first place in the league standings. He also scored in the 8 February cup competition quarter-final stage, the lone goal of a 1:0 win over 1899 Hoffenheim. Through to the end of February, Occean had scored 11 goals in 23 league appearances plus another two goals in three cup appearances.

Occean has spent seven seasons with Canada’s national team. He missed the most recent international window to help recover from a foot injury. Now taking part in his third cycle of FIFA World Cup Qualifiers, Occean scored three goals and recorded one assist in 2011. The 30-year old striker from Brossard, QC originally made his football debut at age six in his hometown of Brossard. He was 22 years old when he made his international “A” debut for Canada on 30 May 2004.

In February, Wilkinson recorded two assists in Canada’s 5:1 victory over Scotland, the team’s lone international match of the calendar month. Wilkinson provided the cross on Canada’s first two goals – the opening goal by Kelly Parker and the go-ahead goal by Sophie Schmidt. On the heels of a silver-medal performance at the CONCACAF Women’s Olympic Qualifying tournament at the end of January, Wilkinson and the Canadian team held a 10-day camp in Larnaka, Cyprus from 17-27 February. With an opening win over Scotland on 28 February, Canada now looks forward to matches against Italy (1 March), Netherlands (4 March) and a yet-to-be determined opponent in the classification final day (6 March).

Wilkinson is in her 10th season with Canada’s national team. A CONCACAF champion in 2010, she has represented Canada at three FIFA Women’s World Cups, five CONCACAF championships (one gold, three silver) and three Pan American Games (gold, silver, bronze). The 29-year old fullback from Baie d’Urfé, QC originally made her football debut at age seven with the Lakeshore program. She was 20 years old when she made her international “A” debut with Canada on 26 April 2003.