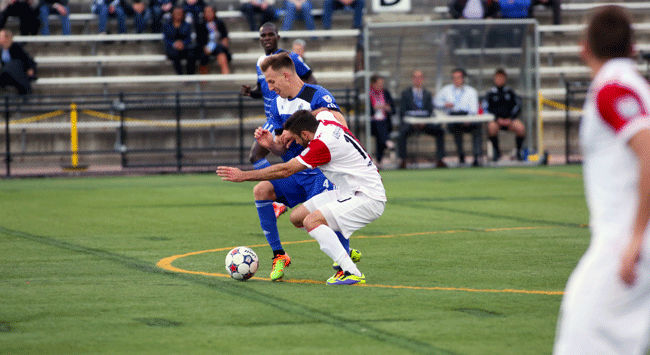 FC Edmonton will face Major League Soccer (MLS) opposition in Montréal Impact next Wednesday at Clarke Stadium in the first leg of the Amway Canadian Championship semi-final after a decisive 3:1 victory over Ottawa Fury FC.

FC Edmonton will face Major League Soccer (MLS) opposition in Montréal Impact next Wednesday at Clarke Stadium in the first leg of the Amway Canadian Championship semi-final after a decisive 3:1 victory over Ottawa Fury FC.

Ottawa possessed the ball for most of the first half-hour of the match, creating five corners and a dangerous free kick from Sinisa Ubiparipovic that struck the crossbar in the 27th minute.

Edmonton was on the board first after Boakai beat Ottawa defender Drew Beckie with speed down the left side and drove a beautiful low cross to the feet of Fordyce, who then one-timed it past Devala Gorrick into the short side to open the score at 1-0 in the 30th minute.

The fast-paced first half was full of action and cautions for both sides and the Eddies went into the locker room after a frantic first half up 1-0.

The second half started on the foot of the Eddies, who quickly doubled their lead in the 48th minute after Boakai was sent in alone on Ottawa keeper Gorrick and capitalized on his own rebound after the initial save. The 17-year-old got himself into the record books by becoming the youngest player in the history of the Amway Canadian Championship to score in the competition.

Boakai and Fordyce connected again to put to bed any chance of a comeback for the Fury when an Eddies’ counter fell to the feet of Boakai who passed off to Fordyce at the top of the box before he slotted his second of the match past Gorrick to make it 3-0 in the 64th minute.

A standing ovation of 2,001 fans at Clarke greeted Boakai in the 77th minute when he was brought off for Massimo Mirabelli, ending his night with a goal and two assists.

Consolation for the Fury came in the 90th minute when Vini Dantas tapped one past Smits while fending off two defenders.

The Eddies will continue their Amway Canadian Championship campaign next Wednesday at home in the first leg of the semi-final against defending champion Montréal Impact.