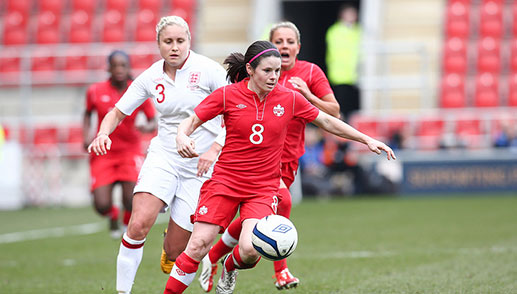 England stands between Canada WNT and another Cyprus Cup Final

England stands between Canada WNT and another Cyprus Cup Final

The 2014 Cyprus Cup has seen plenty of landmarks for Canada’s Women’s National Team.

Nkem Ezurike, Rachel Quon, and Rebecca Quinn have made their first senior international appearances, goalkeeper Karina LeBlanc made her 100th start and On Friday, Head Coach John Herdman coached his 50th game for as they were 3:1 winners over Italy.

But on Monday, Canada will be trying to do something that has been the norm since the tournament started and that’s being one of the two teams in the tournament final.

Canada needs a draw against England on Monday to make its eight finals in eight but recent form has favoured the opposition in head-to-head meetings as it’s England who beat Canada 1:0 in last year’s final.

“This England team looks great,” Herdman said after Canada finished their final training session before the game on Sunday. “I’ve been watching them through this tournament. They literally have brought two squads. They’ve brought a lot of young players in.”

England’s held the upper hand in the two teams’ recent history against each other. Not only did England win in the 2013 Cyprus Cup final, they were 1:0 winners in a friendly the following month. Canada may have beaten the Great Britain team at the Olympics but they haven’t beaten England since the 2011 Cyprus Cup.

With a new coach in charge of England, Canada knows they’ll be against a group of players eager to prove something and show that they merit consideration for future games and tournaments. That extra drive on top of an already healthy competition between Canada and England means an interesting game is in the offing.

“I know how it feels to play for a new coach and it ups that intensity level,” said Canadian captain Christine Sinclair. “You want to perform for the new coach especially with the World Cup coming up. But they have some world class players.”