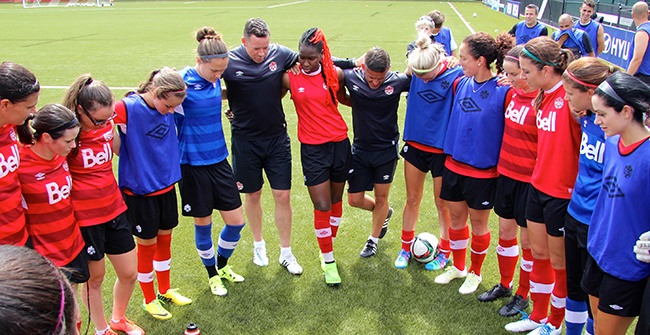 England a familiar foe as Canada WNT goes for the semis

England a familiar foe as Canada WNT goes for the semis

Just four weeks ago, Canada’s Women’s National Team put in a tremendous performance in a 1:0 win over England in their final preparation for the FIFA Women’s World Cup Canada 2015™.

On Saturday, the same two teams meet again, and this time there’s so much more on the line as a spot in the semi-finals is the reward for whomever comes out of BC Place with the victory.

“England have been really interesting through this tournament. They’ve adapted their strategies and tactics to each game,” said Head Coach John Herdman after Canada trained on Thursday.

“They’ve changed their style and approach through this tournament to meet the needs of the opponent. Going into this, it’s a familiar foe in terms of the personnel out there, but in terms of strategies and tactics, we’ll wait and see what he does.”

The win in Hamilton was Canada’s first win in five games against the English but it’s always a close game between the two, with the outcome usually decided by just a single goal.

That’s something Canada’s gotten comfortable with in this tournament, as their two victories have both been of the one-goal variety. With virtually nothing separating the two teams, Canada is hoping to draw on that one x-factor that they have: home support. BC Place is expected to be packed to capacity on Saturday—perhaps even surpassing the almost 54-thousand that were there for the Switzerland game.

“The crowd can lift us when we need it. England could go a goal up and you don’t know what’s going to happen in this game,” said Herdman. “But when we need the crowd most, we just hope we can get the energy of 55-thousand onto the pitch that will lift this group no doubt.”

The winner of this game travels to Edmonton where they would play the winner of the semi-final between Australia and Japan at Commonwealth Stadium on Canada Day.