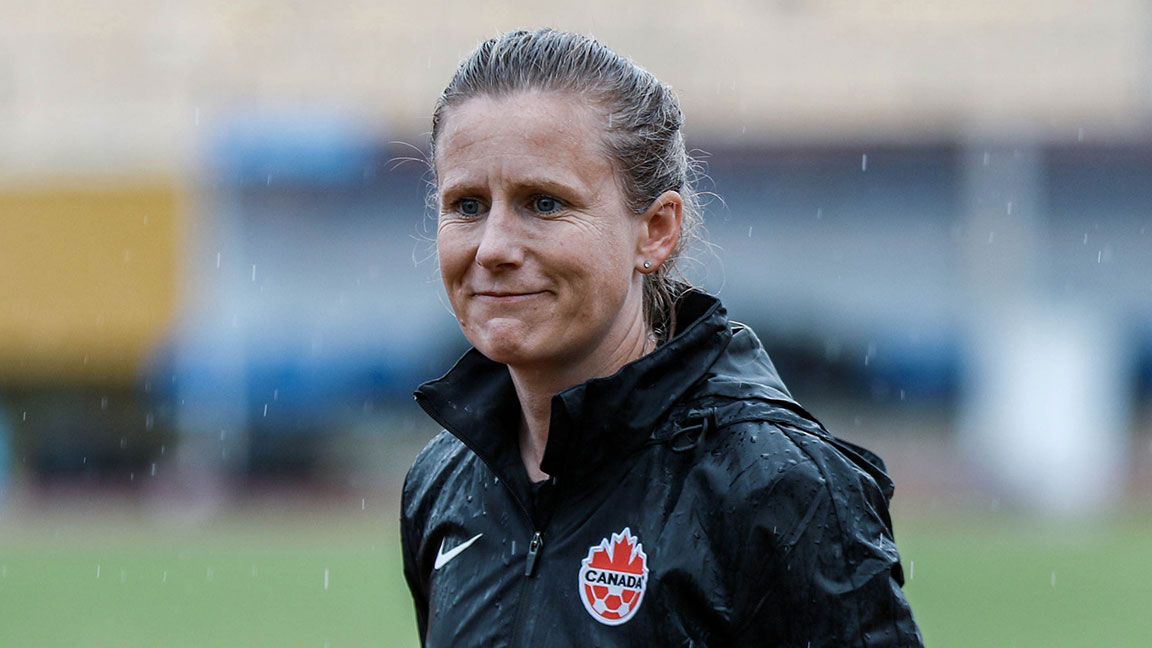 “Canada is becoming a football country,” says Emma Humphries. And the evidence backs her up.

The beautiful game has never been in better health in the Great White North, with the combination of a women’s Olympic gold and a long-awaited FIFA World Cup™ for the men yielding unprecedented levels of enthusiasm.

All of this is indebted to two fiercely driven individuals from the same tiny English town of Consett, and Humphries happens to have a unique perspective on both.

The Canada U-17 women’s coach is a former New Zealand international, and represented her country at the FIFA U-20 Women’s World Cup™ in 2006 and the FIFA Women’s World Cup™ the following year. Her coach at both of those global finals? A certain John Herdman.

“John actually coached me from about 14 years old until I had to stop playing at 23, and I feel super lucky to have had that experience,” she told FIFA+. “He’s definitely the best coach I ever played for.

“Those World Cups with him and New Zealand were such a special time in my life. There were so many moments that I’ll never forget, and so many laughs too. I always say that to the Canada players: you never know which moment at a World Cup will be your last, so it’s important to embrace and enjoy every second that you’re there.”

Herdman and Humphries remain in touch to this day. “He lives just two minutes down the road and it’s cool when we get together with him and bounce ideas off each other,” she explained.

But this link to her former coach is, of course, nothing compared to the connection Humphries shares with Canada’s other Consett miracle-worker. She and Bev Priestman are married, after all, with the pair having met during the former’s spell as New Zealand’s technical director.

They don’t work together day to day – “I don’t think I’d have taken the job if she was going to be my boss” Humphries said, laughing – and do their utmost to avoid talking shop in the evenings.

“Bev is better at that than me,” she admitted with a smile. “But it’s quite unusual having a couple both working in high-performance football, so it’s important to talk about other things. In saying that, I’m so lucky to have a fantastic coach in the house all the time that I can run things past and ask what she would do in certain situations.

“Also, as U-17 coach, I’m trying to produce players for Bev’s team at the end of the day, so understanding her and Canada’s X factors is such a big thing for me in how I pick teams and develop players.”

Knowledge of Priestman and her plans and outlook also means that Humphries speaks with authority in declaring that some of Canada’s FIFA U-17 Women’s World Cup players could force their way into the reckoning for next year’s senior showpiece.

“I won’t give away too much but there are at least a couple going to India who’re definitely on the radar,” she said. “The good thing with Bev there is that she understands how important it is to invest in youth because she was in my role for six or seven years. She’s now getting the benefits of lots of players she worked with in the system and has seen the benefits of them being capped early.

“So, yeah, she’s always looking at the U-15s, U-17s and U-20s to see who can stand up in World Cups and other competitions and, ultimately, come up big for Canada at the top level.”

One player who came up bigger than most in qualifying for India 2022 was Rosa Maalouf. In a cruel blow, however, the highly-rated striker – who topped the Concacaf U-17 Women’s Championship scoring chart with 12 goals in just six appearances – has picked up an injury that will rule her out of the global finals.

“We know Rosa will absolutely smash her recovery and have a big future ahead of her, and there’s no doubt we’ll miss her in India,” Humphries acknowledged. “Taking the football aside, she’s a really big personality within the group.

“But the good thing is that, even without Rosa, we have a lot of goalscorers in this squad. That’s exciting for Canada because it’s an area we’ve looked to put a lot of emphasis on at this level. The last couple of cycles have produced quite a few midfielders and defenders, so with this one we’ve placed a lot of emphasis on our forwards.

“I definitely feel there are goals in this team, and there are a few players in our frontline that I’m looking forward to seeing come to the fore on the world stage.”

Canada won’t have it easy in India, having been drawn in a tough section alongside France, Japan – both former winners of this tournament – and an African surprise package in debutantes Tanzania. Humphries, though, is accentuating the positive – and aiming high.

“We couldn’t have asked for a better, more varied group in terms of experience for the girls,” she said. “I also feel like we’ve played some good opponents to set us up well for playing against the different styles those teams will present, and that we understand what kind of players we’ll need on the park for certain matches.

“My view is that, in any tournament, you go in wanting to get out of your group, win every game in front of you and, ultimately if you can, win the title. And I know this team is more than capable of winning games, scoring goals and making an impact in India. “It’s just a case of whether we execute that and reach our potential. But we definitely have enough weapons to hurt any team in the world.”