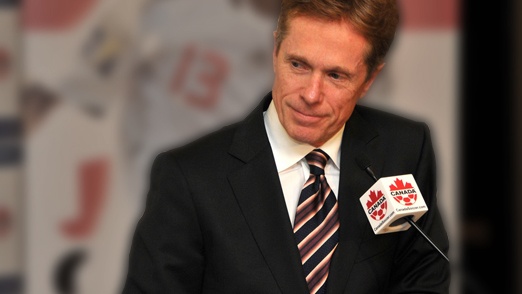 Gerry Dobson has been named The Soccer Hall of Fame’s 2012 Brian Budd Award of Distinction winner. Dobson will officially be recognized at The Soccer Hall of Fame Induction Banquet this 2 June 2012 at the Fairmont Royal York in Toronto. He will be recognized on the same night former footballers Carlo Corazzin, Mark Watson, Charmaine Hooper and Andrea Neil are honoured as part of the Class of 2012.

Dobson has long been the voice of Canadian soccer on Sportsnet, including the current cycle of FIFA World Cup Qualifiers that continues this summer. He joined Sportsnet in 1998, the same year the Canadian sports channel launched. He has also been part of Sportsnet’s English Premier League telecasts since the beginning.

Gerry Dobson graduated from Centennial College in 1981 with a diploma in Radio and Television Programming. He worked at Global Television in the early 1980s as a beat reporter for the Toronto Blizzard of the old North American Soccer League. Dobson then moved on to CFTO TV where he covered a variety of sports from 1984 until 1997.

Dobson plays an active role in the soccer community assisting with many organizations often taking on the task of Master of Ceremonies as well as guest lecturing at local colleges. Dobson actively works with the Canadian Soccer Association, The Ontario Soccer Association, professional clubs and grass roots soccer organizations to help promote the game of soccer in Canada.

MORE ABOUT THE BRIAN BUDD AWARD OF DISTINCTION
The Brian Budd Award was developed to recognize outstanding individuals who have excelled both in soccer and in another endeavour but who might not otherwise qualify for induction into The Soccer Hall of Fame. The candidate must exemplify good character, show outstanding dedication, achievements and leadership in developing soccer in Canada and provide inspiration to past, present and future generations.