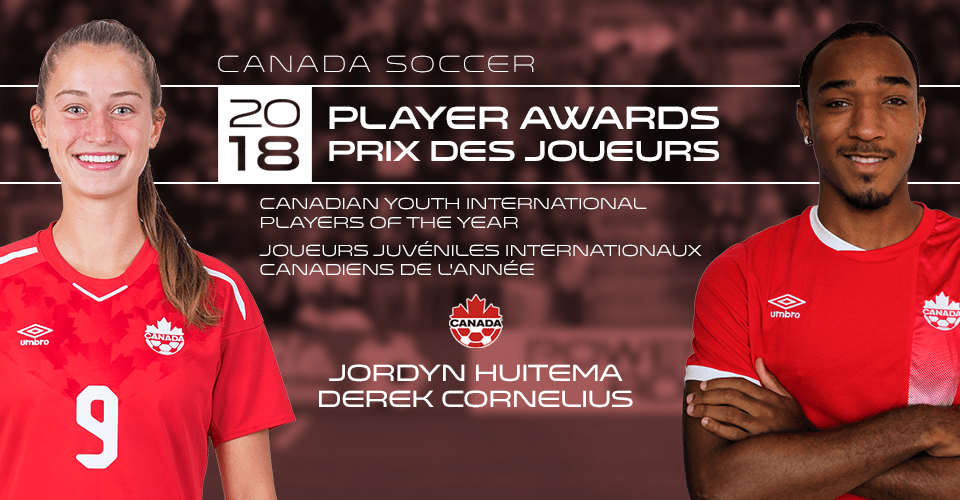 Canada Soccer’s young footballers Derek Cornelius and Jordyn Huitema have been named the 2018 Canadian Youth International Players of the Year. The young duo have been […]

Canada Soccer’s young footballers Derek Cornelius and Jordyn Huitema have been named the 2018 Canadian Youth International Players of the Year. The young duo have been recognised for their excellence at the international level with Canada Soccer’s national youth teams.

Derek Cornelius was a standout for Canada at the International espoirs Provence Toulon tournament in May and June, with the first-time Canadian entrants finishing sixth at the prestigious international youth tournament in France. Canada were undefeated with Cornelius in the lineup at centre back, including a 1:0 win over Turkey in which Cornelius was Canada’s man of the match. Cornelius also helped Canada open with a 0:0 draw against Portugal and then wore the captain’s armband for a 1:1 draw with Japan.

“Derek Cornelius came into the March camp in Spain with the Men’s National Team and showed a lot of maturity and composure for a young player which led us into the Toulon tournament in May and June where he took the captain’s armband and helped us to achieve some pretty remarkable results,” said John Herdman, Canada Soccer’s Men’s National Team Head Coach. “He has strong character and a drive to reach the top so we hope he can continue to progress.”

“Jordyn Huitema has continued performing and adding to her repertoire as a striker throughout 2018,” said Kenneth Heiner-Møller, Canada Soccer’s Women’s National Team Head Coach. “She scored at three different levels at international tournament this year, winning the Golden Boot at the Concacaf Women’s Under-20 Championship, scoring three goals at the FIFA U-17 Women’s World Cup where as captain she led Canada to a fourth-place finish, and she scored four goals for the Women’s National Team at the 2018 Concacaf Women’s Championship. Scoring goals have always been a part of Jordyn’s game, but she has shown continued improvements in numerous aspects of the game throughout 2018. It is going to be very interesting to follow her pathway, and the next steps in her development.”

Canada Soccer’s Men’s and Women’s EXCEL programs channel exceptional players into the best soccer environments. Cornelius and Huitema were no exceptions in 2018, both equally starring at the international “A” level with Canada Soccer’s Men’s National Team and Women’s National Team, respectively. While Cornelius helped Canada to a perfect 4-0-0 record with four clean sheets, Huitema helped Canada qualify for the FIFA Women’s World Cup France 2019 while finishing second at the 2018 Concacaf Women’s Championship.