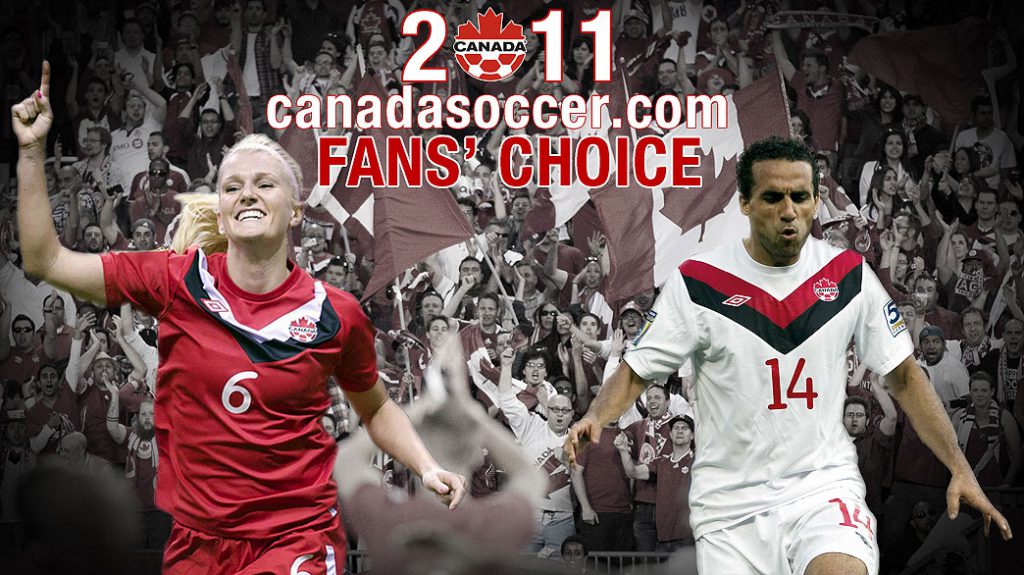 Dwayne De Rosario and Kaylyn Kyle have been selected as the 2011 Canada Soccer Fans’ Choice Award winners. The two national players were selected fan favourites by Canadian supporters in an online vote via the Canadian Soccer Association’s official website CanadaSoccer.com and its Facebook page Facebook.com/CanadaSoccer.

DWAYNE DE ROSARIO
National team veteran Dwayne De Rosario has always been amongst the favourites with Canadian supporters. While 2011 proved to be a trying for season for the Canadian attacker (he was traded twice during his Major League Soccer campaign), De Rosario rose to the occasion and notched a number of landmark achievements during the year.

With Canada, De Rosario scored four goals and two assists, all while taking part in his fifth CONCACAF Gold Cup and fourth cycle of FIFA World Cup Qualifiers. His last goal of the season was the 19th of his career, bringing him level with Dale Mitchell for the Canadian record at the international “A” level.

“I want to thank all the Canadian soccer fans who voted for me. I am truly honoured and humbled to be selected for this award. I have always been incredibly proud to wear the Canadian jersey and to play in front of Canadian fans. I hope that I can be an example that will provide inspiration to young Canadians playing soccer.

“I encourage all Canadian fans to continue to support soccer in this country as together we can continue to improve the sport.”

KAYLYN KYLE
After bursting onto the scene with a number of eye-catching performances for Canada in 2010, Kaylyn Kyle solidified her status as one of the leaders on the Canadian team throughout 2011.

Already a CONCACAF champion at both the “A” and youth levels, Kyle featured prominently for Canada at the FIFA Women’s World Cup Germany 2011. The Saskatoon native was also part of the Canadian squad that won a gold medal at the Pan American Games Guadalajara 2011.

In all, Kyle made 23 appearances in 2011, including a team co-best 21 starts. She recorded three goals and three assists.

“First off, I want to thank all of the fans for voting and for all of the support they give Canada’s Women’s National Team! I am truly lucky to represent my country and also my province Saskatchewan.

“2012 is a huge year for our Canadian teams and I look forward to all of our fans getting behind us again and supporting the improvement of the sport within Canada and the development of both the men’s and women’s game.”