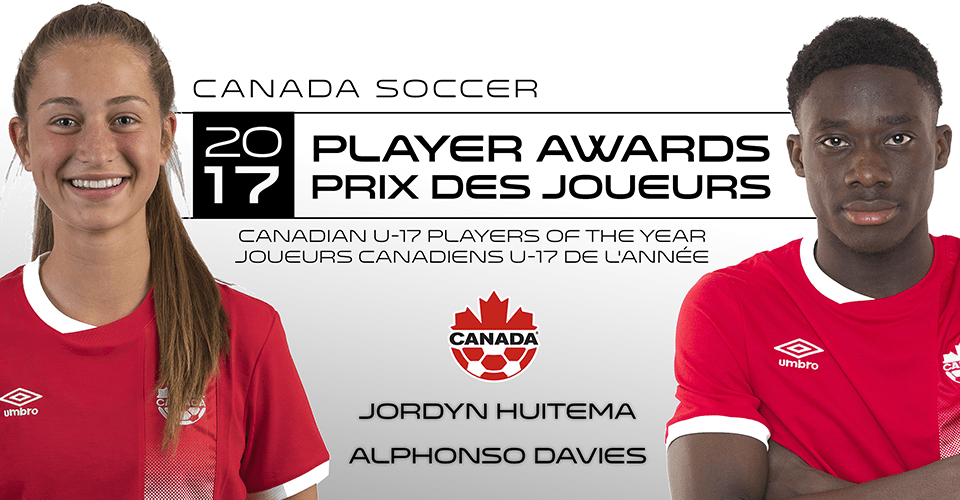 Alphonso Davies and Jordyn Huitema have been named 2017 Canadian U-17 Players of the Year after outstanding campaigns that included call ups to Canada Soccer’s Men’s National Team and Women’s National Team. Canada’s two young footballers won the honour from a vote by national team coaches as well as Canadian clubs and coaches.

Davies of Edmonton, Alberta plays for Vancouver Whitecaps FC while Huitema of Chilliwack, British Columbia plays for Vancouver Whitecaps FC Girls REX. In 2017 with Canada, Davies was the Top Scorer and Best Young Player at the CONCACAF Gold Cup while Huitema made her international debut at 15 and became Canada’s second-youngest goalscorer just a month after her 16th birthday.

Davies scored three goals in six matches and won both the Golden Boot and Best Young Player awards at the 2017 CONCACAF Gold Cup. With Vancouver Whitecaps FC, he scored three goals and two assists in 33 matches across all competitions, including a goal in the quarter-finals of 2016-17 CONCACAF Champions League. He also became the youngest goalscorer in the history of the Canadian Championship with a goal against Montréal in May.

“It was a breakout year for Alphonso Davies as the CONCACAF Gold Cup gave him the stage to showcase the range of his talents,” said Octavio Zambrano, Canada Soccer’s Men’s National Team Head Coach. “He is a force with which to be reckoned as he is strong, he is fast, and he doesn’t flinch in front of goal. He is a player with all the tools and he has a good head on his shoulders.”

Even the corner flags are not safe…@AlphonsoDavies #CANMNT #GoldCup2017 pic.twitter.com/hUhyYrR0vd

Huitema scored two goals in seven international matches as she became the third youngest player in Women’s National Team program history. After helping Canada finish second at the 2017 Algarve Women’s Cup in March, she scored a brace against CONCACAF rivals Costa Rica in a 6:0 home win in June. She then scored with each the U-20 and U-17 teams in July, making her the first Canadian to score at three different international age groups in the same calendar year.

“To score two goals in front of over 20,000 fans after just turning 16 is something that every kid dreams to do,” said John Herdman, Canada Soccer’s Women’s National Team Head Coach. “She made her dreams come true in 2017. To score at every age group is a unique achievement for a unique player. She has an exciting future, but it is underpinned by an intense work ethic and that makes this young player special.”