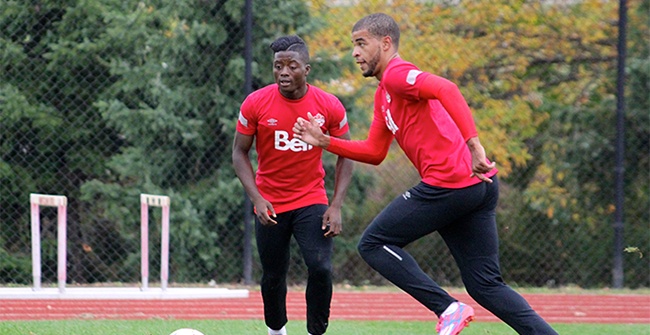 Colombia a massive task for young Canadian side

Colombia a massive task for young Canadian side

A trial by fire for awaits Canada MNT on Tuesday night.

With a squad featuring more than its fair share of young faces, it’s going to be very much a trial by fire for Canada’s Men’s National team on Tuesday night.

The Canadians are in tough on Tuesday night at Red Bull Arena in Harrison, NJ, USA, against some of the biggest names in the game as they take on Colombia, a team ranked third in the world after a quarterfinal performance at this past summer’s FIFA World Cup Brazil 2014™.

“We know perfectly well that Colombia is a very good team. They play a modern style of game defensively and they know how to drop off,” said Floro on Monday. “Their quality is very good, so they will obviously be a very good test for us to realize if we are improving our level compared to the last game.”

Canada held a training camp in Cancun, MEX prior to making the trip to New Jersey while Colombia is coming off a 3:0 win over El Salvador on Friday.

The two teams have only met twice at the senior level. Colombia won the first meeting in 1988 by a 3:0 scoreline but Canada famously returned the favour in the final of the 2000 CONCACAF Gold Cup when Jason deVos and Carlo Corrazin scored as Canada won the Gold Cup with a 2:0 victory.

Canada faces long odds in duplicating that feat but this will be a test of the team’s tactical evolution under Floro.

“We are focused on ourselves and our personal goals as a team and we are looking forward to the future. That is always the main focus,” said forward Tosaint Ricketts, who has scored twice in as many games for Canada.

“But with Colombia I think it will be about our transition game going forward and coming back and switching between defense and attack will be the most important thing (to be aware of). I think if we stick to our tactics and what we are being taught, we’ll be all right.”