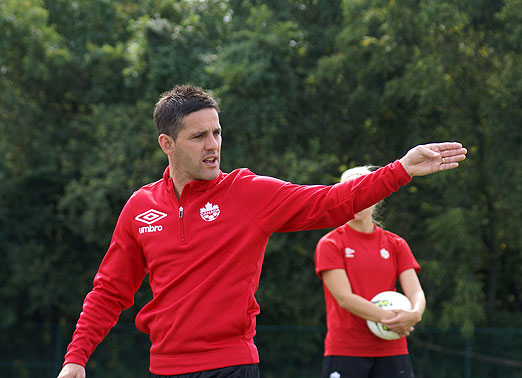 “We are all looking forward to getting into Vancouver.”

With just one week to go before the opening match of the 2012 CONCACAF Women’s Olympic Qualifying tournament, Canadian head coach John Herdman took time to speak with a group of media via a call from the national camp in California. The Canadian team has just a couple more days of preparation in California before heading home to Vancouver, BC on Saturday 14 January. The team’s opening match is Thursday 19 January against Haiti at BC Place.

“We have a few key focuses for the coming week, but (for us) it will be about how we grow through the tournament and how we approach each match,” said Herdman.

Canada’s three group matches are 19 January against Haiti, 21 January against Cuba and 23 January against Costa Rica. All three matches will be played at BC Place with a 19.30 local kick off time (22.30 ET / 19.30 PT). The top two teams in the group advance to the 27 January semi-final stage with a spot in the London 2012 Olympics on the line; potential Group B opponents for the semi-final stage are USA, Mexico, Dominican Republic and Guatemala.

“We are all looking forward to getting into Vancouver and playing the matches,” said Herdman. “The players will have a couple of days off (after we arrive and) before we all shift our focus to that first match.”

All eight teams in the CONCACAF women’s competition will feature 20 players. Canada announced its roster in December, but can still make changes in case any injuries arise over the next few days. Teams must submit their final roster 48 hours before their opening match.

As for the proverbial “12th player” that Canada can expect to have on its side, it will be the home crowd at BC Place in Canada. This marks the fourth time a CONCACAF women’s “A” tournament has come to Canada, albeit it is the first time for the CONCACAF Women’s Olympic Qualifying tournament.

Canada’s all-time record in CONCACAF competition in Canada is 11 wins and one loss. Said head coach Herdman, “it is a great opportunity to play in front of the home nation.”

Canada, whose title sponsor is Winners and presenting sponsor is Teck, will meet the Canadian media in person on Monday 16 January at 12.15 PT local at the Georgian Court Hotel. As for Canadian fans hoping to catch the team in action, details on how to purchase tickets to thet 2012 CONCACAF Women’s Olympic Qualifying tournament are available via the CanadaSoccer.com CONCACAF Women’s Olympic Qualifying tournament information page.