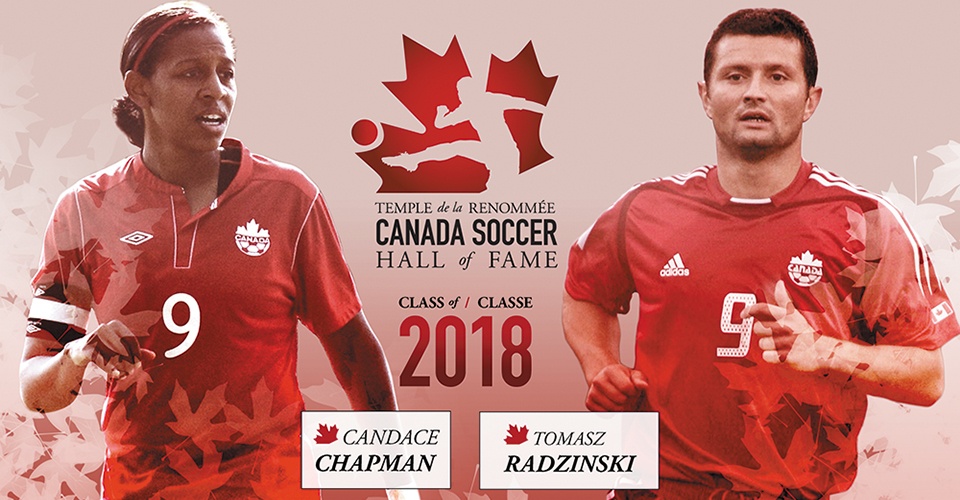 Class of 2018: Chapman and Radzinski named to Canada Soccer Hall of Fame

Class of 2018: Chapman and Radzinski named to Canada Soccer Hall of Fame

Canada Soccer has announced that former National Team stars Candace Chapman and Tomasz Radzinski have been named to the Canada Soccer Hall of Fame. The two […]

Canada Soccer has announced that former National Team stars Candace Chapman and Tomasz Radzinski have been named to the Canada Soccer Hall of Fame. The two Class of 2018 stars were officially announced ahead of the Annual Meeting of the Members in Yellowknife, Northwest Territories and will be formally celebrated later this year at National Team home matches.

“I am incredibly humbled and honoured to be inducted into the Canada Soccer Hall of Fame along with Tomasz Radzinski as part of the Class of 2018,” said Candace Chapman. “It is quite remarkable for me to think of the incredible women with whom I now share this honour: they were pioneers of the game and some fantastic teammates and friends of mine who have laid the foundation for the Women’s National Team Program.”

At the professional level, Chapman won back-to-back Women’s Professional Soccer championships in 2010 with FC Gold Pride and in 2011 with Western New York Flash. She also enjoyed club success with Burlington Sting at Canada Soccer’s U-19 Cup, with the University of Notre Dame in the 2004 College Cup, and with Vancouver Whitecaps FC in the 2006 USL W-League championship. At the international youth level, she was a tournament all-star when Canada won silver at the FIFA U-19 Women’s World Championship Canada 2002.

Chapman grew up in Ajax, Ontario and played her youth football with Ajax United and Burlington Sting. After stints with Toronto Inferno, Atlanta Silverbacks, and Vancouver Whitecaps, she played in the WPS with the Boston Breakers, FC Gold Pride, and Western New York Flash before rounding out her career in the NWSL with the Washington Spirit in 2013. For Canada, she made 114 international “A” appearances from 2002 to 2012 as both a midfielder and centre back and was named to the All-Time Canada XI as part of Canada Soccer’s centennial celebrations in 2012.

“To my incredible former teammates and forever friends: the bond will always be there. Thank you for challenging me to continually be at my best and, most importantly, for all the laughter and love.”

Tomasz Radzinski was a star forward with Canada Soccer’s Men’s National Team who made more than 500 appearances at the professional level including UEFA Cup and UEFA Champions League. He represented Canada at one Concacaf Gold Cup and in three cycles of FIFA World Cup Qualifiers. He was Canada Soccer’s 1998 Canadian Player of the Year and the first Canadian to reach the Round of 16 in UEFA Champions League in 2000-01.

“I am deeply humbled to be inducted into the Canada Soccer Hall of Fame as part of the Class of 2018 alongside Candace Chapman,” said Tomasz Radzinski. “I would like to thank my teammates and coaches as well as everyone who along the way contributed to making me the best player that I could be.”

At the professional level, he won back-to-back Belgium championships with RSC Anderlecht in 2000 and 2001, also featuring in both UEFA Cup and UEFA Champions League during that run. He was also the Top Scorer in Belgium in 2000-01. He then moved to England on a Canadian record transfer fee where he made close to 200 appearances in the Premier League with Everton and Fulham.

Radzinski played his youth football in Poland, Germany, and Canada, joining the North York Rockets as a teenager in the Canadian Soccer League. After playing for St. Catharines Wolves, he played in Belgium with Germinal Ekeren and RSC Anderlecht, in England with Everton and Fulham, in Greece with Skoda Xanthi, and again in Belgium with Lierse SK and then Waasland-Beveren in 2012. For Canada, he made 46 international “A” appearances from 1995 to 2009, scoring 10 goals and recording eight assists.

“Playing professional soccer was a dream come true for me. Playing my favourite sport enabled me to discover the world with my clubs and, most notably, with the Men’s National Team. I am sure most players would agree that representing one’s country at the highest level always feels like an incomparable honour.”

CANADA SOCCER HALL of FAME
The Canada Soccer Hall of Fame celebrates the individual and team achievements and traditions  in the game of soccer in Canada. Including the Class of 2018, the Canada Soccer Hall of Fame has welcomed 114 players, 13 managers/coaches, 10 officials, and 40 builders as honoured members since 2000. Honoured members, by their achievements and passion, have made a positive impact to soccer in Canada and have left a legacy for the sport in our country and around the world.

This year’s Class of 2018 was selected by the Voting Group for Modern Canadian Players from a list of 16 nominations.

The Canada Soccer Hall of Fame recognizes the contributions of soccer to the athletic and cultural institution in Canada, celebrating achievements and preserving and commemorating the history of our game.