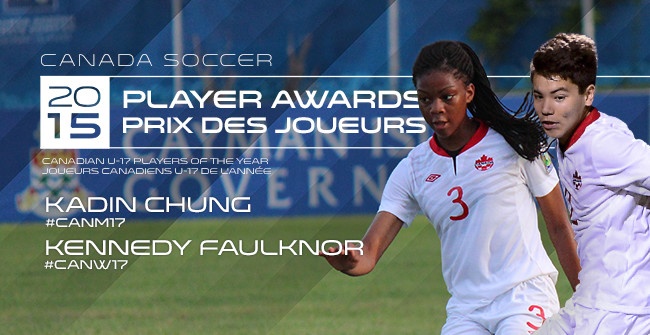 Chung, Faulknor named 2015 Canadian U-17 Players of the Year

Chung, Faulknor named 2015 Canadian U-17 Players of the Year

Kadin Chung and Kennedy Faulknor have been named 2015 Canadian U-17 Players of the Year.

Kadin Chung and Kennedy Faulknor have been named 2015 Canadian U-17 Players of the Year. Canada’s two footballers won the honour from a vote shared by national team coaches (50%) as well as Canadian clubs and coaches (50%).

Kadin Chung is a member of Canada’s national youth program as well as Vancouver Whitecaps FC Residency. He represented Canada at the 2015 CONCACAF Men’s Under-17 Championship in Honduras, playing every minute of Canada’s six competitive matches. Of note in the opener against Haiti, he made a goal line clearance and later scored a goal in a 3:1 win. Before the competition, the Canadian left back earned man-of-the-match honours in a friendly match against Guatemala.

“I would like to congratulate Kadin on this great honour,” said Canada Soccer’s Men’s U-17 Coach Sean Fleming. “He had a tremendous cycle and was very consistent in all our national-team projects. He had an excellent performance at the CONCACAF Men’s Under-17 Championship and we look forward to watching him in the future with Canada at the highest level.”

Faulknor is a member of Canada’s national youth program as well as Unionville-Milliken SC. She played in three youth international matches for Canada in 2015, then worked her way up to a call-up to Canada’s Women’s National Team before year end. On 9 December 2015, she became the youngest centre back to make her full debut with Canada at age 16 in a 3:0 win over Mexico, starting on the left side next to 20-year old superstar Kadeisha Buchanan.

“She is very comfortable on the ball and she has adapted over the year – she was a left back at the U-15 level and a wide forward before that,” said Canada Soccer’s Women’s U-17 Coach Bev Priestman. “She has really earned her trade as a centre back: she is really comfortable on the ball, physical, and you could even say she has some Kadeisha Buchanan-type traits and we are seeing that in the Women’s National Team camp.”