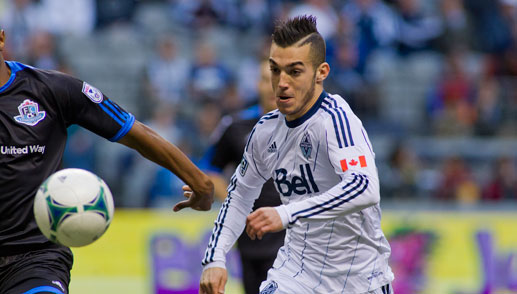 Championship final to be decided Wednesday in Vancouver

Championship final to be decided Wednesday in Vancouver

After a cagey first leg that ended in a 0:0 draw on 15 May in Montréal – the final of the 2013 Amway Canadian Championship will be decided on Wednesday evening in Vancouver when Whitecaps FC play host to the Montréal Impact in the second leg of the final at BC Place (19.00 local kick-off).

Whitecaps FC will be looking to make history by winning the first Voyageurs Cup in franchise history; while the Impact are seeking a first Championship title since 2008.

The winner of the final will also qualify for the 2013-14 CONCACAF Champions League.

Wednesday night’s title-decider will be broadcast live in Canada on Sportsnet ONE and Pacific (22.00 ET / 19.00 PT). Fans will also be able to follow limited live coverage on Twitter: @CanadaSoccerEN. Highlights from the match will be available on CanadaSoccerTV.

WATCH NOW: Highlights from all matches in the 2013 Amway Canadian Championship on CanadaSoccerTV

After four consecutive Championship wins for Toronto FC – this will be the first season since 2008 that a team other than Toronto will lift the Voyageurs Cup.

The winner of the Championship final will begin its CONCACAF Champions League journey in July in the tournament’s preliminary stages.