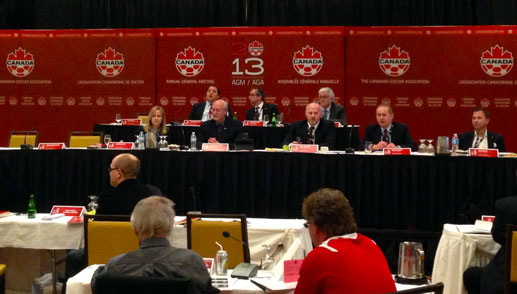 Membership elected three representatives to its Board of Directors and welcomed a new constituent to its ranks in the addition of a fifth professional club in Canada, the Ottawa Fury FC.

At its 2013 Annual General Meeting held in Halifax, NS on 4 May 2013, the Canadian Soccer Association membership elected three representatives to its Board of Directors. This Board of Directors, under the new governance structure, is composed of 14 Directors and led by President Victor Montagliani who was elected in 2012.

On Saturday, members were elected to the Vice-President and two elected Directors positions. Steven Reed was reappointed as Vice-President, while the two Directors elected are Ryan Fequet and Gerald MacDonald.

The members of the Board of Directors, following this most recent elections, are Victor Montagliani (President), Steven Reed (Vice-President), Wendy Bedingfield, Nick Bontis, Earl Cochrane, Charlie Cuzzetto, Ryan Fequet, Gerald MacDonald, Martial Prud’homme, and Don Story. Four appointments will be made later this summer to complete the group.

The membership also officially welcomed a new constituent to its ranks in the addition of a fifth professional club in Canada, the Ottawa Fury FC. The Ottawa Fury FC will play its inaugural season in the North American Soccer League in 2014.

The Canadian Soccer Association’s Annual General Meeting weekend, spanning 3-6 May, also provided the members with a chance to participate in a number of workshops on topics from governance to strategic planning. In addition, the provincial and territorial Executive Directors met to discuss their evolving working relationship with the Association.

The Canadian Soccer Association’s 2012 Annual Report, covering the Association’s activities and highlighting its Centennial celebration, is now available on canadasoccer.com.