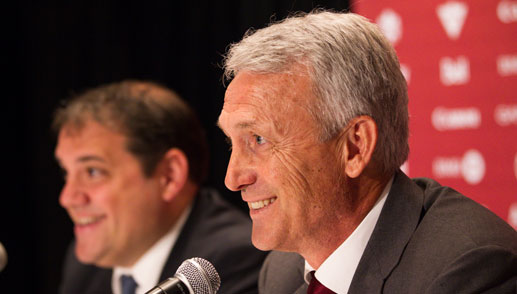 He will officially assume his duties starting 1 August 2013

The Canadian Soccer Association is pleased to announce that Benito Floro has been named the new Head Coach for Canada’s Men’s National Team. He will officially assume his duties starting 1 August 2013.

“The Canadian Soccer Association is thrilled to bring such an accomplished soccer mind to lead our next phase of development in the Men’s National Team program”, said Victor Montagliani. “Benito Floro is renowned for his tactical and strategic approach to the game and his influence in implementing a more attacking style of football in Spain. We are confident he will provide a strong leadership in the development of Canada’s Men’s game, as well as complement and elevate the work that our technical department, lead by Tony Fonseca, is already doing.”

One of the most highly respected coaches in Spain, sometimes even tagged as “one of the fathers of Spanish football”, Benito Floro’s noteworthy coaching career has taken him around the world, including stints in Japan, Mexico (CF Monterrey), Ecuador and Morocco. He has also coached Villarreal and Mallorca in Spain’s La Liga. In 2004, he was recommended to take on the head coach role for the Spanish national team, a position he had to decline at the time.

“I want to thank the Canadian Soccer Association for appointing me as Canada’s Men’s National Team’s coach,” said Benito Floro. “I hope to fulfill all the goals of the country; it will be difficult but we are going to work towards that with a lot of vision.”

Floro started his professional career with Albacete Balompié, where he began coaching in the 3rd division, helping the team earn promotions in back-to-back campaigns up to the first division.

Following this success, Floro became the youngest ever coach for Real Madrid CF, where he finished in second position in the Spanish League and later won the Spanish FA Cup (1992-1993) and the Copa Del Rey (1993-1994).

He was then hired in Mexico (1999-2001) to keep Monterrey from relegation, and achieved not only this, but helped the team reach 1st position during the Championship, qualifying them for the final.

To date, Floro has coached more than 300 matches in the Spanish professional football and gave the opportunity to debut to a large number of young players in the Spanish League, some of which later selected for Spanish National Team. He is the only Spanish coach who has coached at every level of the Spanish Football League, both on the amateur and professional sides. He is also the only one who has led his teams to promotion to a higher division through each and every one of these levels.

As of  1 August, Benito Floro will take the lead on all Men’s National Team activities, as well as head coaching duties for Canada’s Men’s Olympic (U-23) Team. He will be assisted by his son Antonio Floro Esteve.