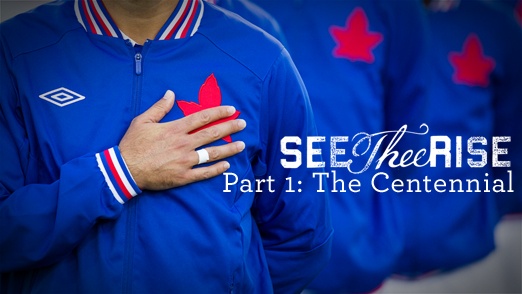 7-part series on CanadaSoccerTV to profile the road to Brazil 2014™.

Fans are invited to take a behind-the-scenes look at Canada’s journey towards the 2014 FIFA World Cup Brazil™ with the new SeeTheeRise documentary series produced by CanadaSoccerTV.

The seven-part documentary series will profile each of Canada’s games from the Centennial friendly against USA on 3 June through to final match of the CONCACAF 3rd Round of FIFA World Cup™ Qualifiers on 16 October.

The series debuted on Thursday 30 August with the first episode, SeeTheeRise: Part 1, The Centennial, focusing on Canada’s 0:0 draw against the USA on 3 June at BMO Field in Toronto as the Canadian Soccer Association celebrated its 100th anniversary.

Tickets to Canada’s next two home matches in FIFA World Cup Qualifiers are available via Ticketmaster.ca or by phone at 1.855.570.7500, with full information available at CanadaSoccer.com/seetheerise. Group discounts are available via marketing@soccercan.ca or 613.237.7678. Following the Friday 7 September match against Panama at BMO Field, Canada’s next home match is Friday 12 October against Cuba. Canada’s remaining away dates are Tuesday 11 September in Panama and Tuesday 16 October in Honduras.