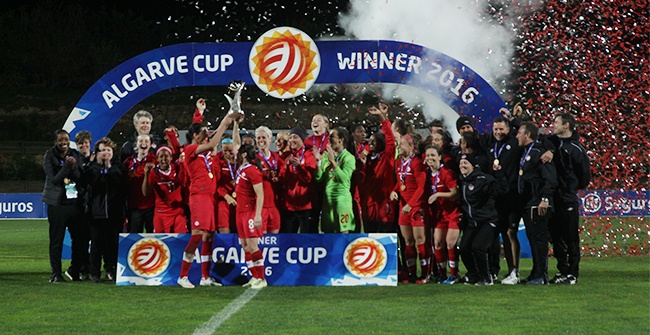 Canada’s Women’s National Team pulled out all the stops against Brazil in the final of the 2016 Algarve Cup and took home gold after defeating the Rio Olympic hosts 2-1.

Shelina Zadorsky opened scoring in the 60th minute, putting in a ball off a well-placed corner from Ashley Lawrence.

“I was really excited to get that first goal and I think it helped our team with momentum,” said Zadorsky after the match. “It was a perfect ball from Ashley to the near post and I was in the right place at the right time. I am just really proud of the whole team.”

Continued pressure from Canada resulted in a second goal seven minutes later from Janine Beckie, assisted by Sophie Schmidt. With the Brazilian defense scrambling to get back into position, Schmidt placed a ball directly in front of sprinting Beckie, who was able to slot it left and out of reach of the keeper.

“Our defensive pressure the whole game was really putting them on their heels,” said Beckie of the combination play leading to Canada’s second goal. “Some great pressure from Sophie, combined with confusion in their defensive line, and I was able to put it away.”

Brazil’s lone goal was scored in the 90th minute by Cristiane in a last minute push from Brazil to try and reclaim the match.

Herdman, who sat in the stands for the second half of the match, was beaming after the win.

“This is fantastic. The girls deserve that,” he said. “That was their best Brazil team they put out tonight, they’ve been strong in this tournament but the girls, against the wind, scored two goals. They showed that team spirit which really does make a difference. I am just really happy for them. We haven’t won anything for a while, but we beat Brazil in the Pan Ams in our run to London, so hopefully this is a good omen.”

The Algarve Cup was the first step on the road to the Rio Olympic Games for Canada, as the Women’s National Team looks to defend and even better its bronze from London 2012. During the tournament, Canada Soccer announced it will host two Women’s National Team matches against 2016 Rio Olympic host nation Brazil on June 4th in Toronto at BMO Field, and June 7th in Ottawa at TD Place.

“This is a great start for it,” said Zadorsky. “I am just looking forward to playing at home, in front of our amazing fans and just coming off of the world cup knowing how many people supported that and the Pan Am games, so now we are going to be on home soil against a class team like Brazil, so I am really looking forward to it. “

“We’ve really bought in to a collective mindset that we came here to win and that’s what we did and it’s just great momentum going into the next phase before Rio,” added Beckie. “This is another great step in this journey.”

This is Canada’s first Algarve Cup victory. Canadian defender Kadeisha Buchanan also look home player of the tournament honours.
Tickets will go on sale for both Canada Soccer Road to Rio home matches on Tuesday, 22 March at 10:00 ET. Fans wishing to receive access to a special presale window can do so by subscribing to Canada Soccer’s newsletter at: https://www.canadasoccer.com/subscription.php?act=subscribe.