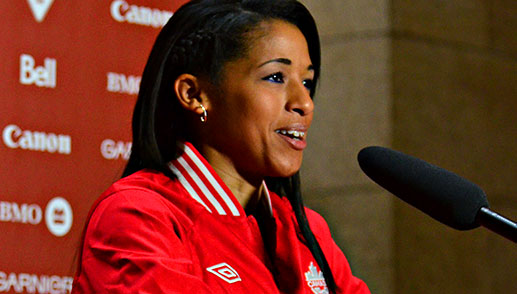 Canada Women’s National Team, and London 2012 Olympic bronze medallist, will kick off its 2014 home schedule by hosting USA in a Women’s International Friendly match in Winnipeg on 8 May 2014 (kickoff 19.00 local time). The match, presented by BMO, marks the first Women’s National Team home match in Winnipeg since 1990, when Canada hosted its first-ever women’s international match in the Manitoba capital.

“In line with the priorities identified in Canada Soccer’s recently introduced 2014-2018 Strategic Plan titled Leading a Soccer Nation, we believe that increasing the number of playing opportunities against quality opponents at home will boost the performance of our National Teams,” said Peter Montopoli, Canada Soccer’s General Secretary. “We are thrilled to bring world-class women’s soccer back to Winnipeg and look forward to giving the fans in Manitoba a chance to come and support Canada’s Women’s National Team on the road to Canada 2015.”

Winnipeg is also one of the six Official Host Cities for the FIFA Women’s World Cup Canada 2015™.

”We are pleased to host this important match and give Manitoba soccer fans a chance to see some of the best players in the world,” said Minister of Tourism, Culture, Heritage, Sport and Consumer Protection Ron Lemieux. “This kind of event will highlight the game of soccer, and the amazing facility of Investors Group Field that will be used to host the game.”

Montopoli, while announcing the 8 May 2014 Women’s National Team match at a press event in Winnipeg, also presented the preliminary economic impact projections for the FIFA U-20 Women’s World Cup Canada 2014 and FIFA Women’s World Cup Canada 2015™, compiled by the Canadian Sport Tourism Alliance. He highlighted that “in its effort to encourage and oversee the growth of the game in Canada, another one of the four strategic priorities defined in the organization’s strategic plan, Canada Soccer is setting out to host a successful FIFA Women’s World Cup Canada 2015™ and leave a legacy for sport, for women, and for Canada that reaches far beyond the competition.” The initial projections indicate the two competitions will produce output of over $337 million nationally.

A detailed release on the economic impact projections is available on canadasoccer.com.

Tickets for the Canada-USA match on 8 May at Investors Group Field in Winnipeg will go on sale via Ticketmaster on Friday 14 February. In a continued effort to provide an accessible and affordable family experience for the Canadian soccer community and its supporters, tickets will be available starting at $20 (plus applicable fees). Special group discounts and a reduced family pack will also be offered.

In addition, purchasers of tickets for the Canada’s Women’s National Team match in May will be offered a special opportunity to opt-in to a Priority Access list to purchase venue packs for the FIFA Women’s World Cup Canada 2015™ matches in Winnipeg when the packs go on sale.

All ticket and event details will be posted to canadasoccer.com as they become available.

“Every time we come into these games against USA, we want to be the team that stops them, stops their unbeaten streak,” said Canada’s Women’s National Team Head Coach John Herdman. “They’re an absolute machine but at some point someone’s going to trip them up. We are hoping that with our fans behind us and cheering us on, we can do that in Winnipeg in May.”

The 8 May Canada-USA match will also be broadcast live nationally on Sportsnet.