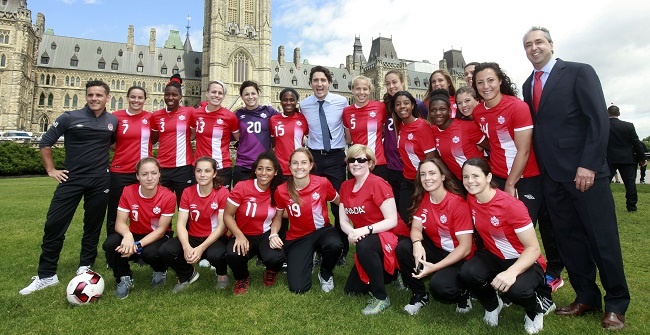 Road to Rio match against Brazil

Canada’s Women’s National Team will play Brazil Tuesday, 7 June in the second of a two-game home series against Olympic hosts Brazil. After arriving in Ottawa from Toronto following the first match, the Canadian squad took some time to visit Ottawa’s landmarks before heading out to training.
On a morning trip to Parliament Hill, the team was posing for a group photo in front of Canada’s iconic Parliament buildings when Prime Minister Justin Trudeau and Carla Qualtrough, Minister of Sport and Persons with Disabilities, came down from the Centre Block and surprised them.
“Wait, a group picture on Parliament Hill without me?” said the Prime Minister, before shaking hands with the whole team and speaking with captain Christine Sinclair.

Prime Minister Trudeau and Minister Qualtrough, were presented with jerseys from Sinclair and Canada Soccer General Secretary Peter Montopoli.
Prior to the surprise visit, when asked if it was special coming to Parliament Hill as the Canadian team, Sinclair was already effusive about the experience.
“Of course,” she said. “To be able to bring this team here is pretty special. It is a unique opportunity and we are glad Canada Soccer set this up for (our team).”
Moments later, Sinclair was presenting a jersey to the Prime Minister, a broad smile on her face.
After leaving Parliament Hill, it was on to Ottawa City Hall for veteran player Rhian Wilkinson and Montopoli, to raise the Canada Soccer flag in front City Hall. Wilkinson, who played for four seasons in Ottawa, was clearly thrilled be in the nation’s capital remarking: “It really is a second home for me.”
After an announced 28,604 fans at BMO Field, Ottawa looks to be near a sell-out crowd with over 95% of the venue sold and less than 2,000 tickets remaining including limited seating just released with an obstructed view behind the team benches.
Fans unable to attend the matches in person will have the opportunity to catch all the action on 7 June starting at 19:00 on TSN1, TSN3, TSN4 and TSN5 and RDS.

Ticket information for Canada v Brazil at TD Place in Ottawa, June 7th 2016: Tickets are on sale via CanadaSoccer.com, CapitalTickets.ca, by phone at 613-599-FANS (3267), and in person at the TD Place Box Office. 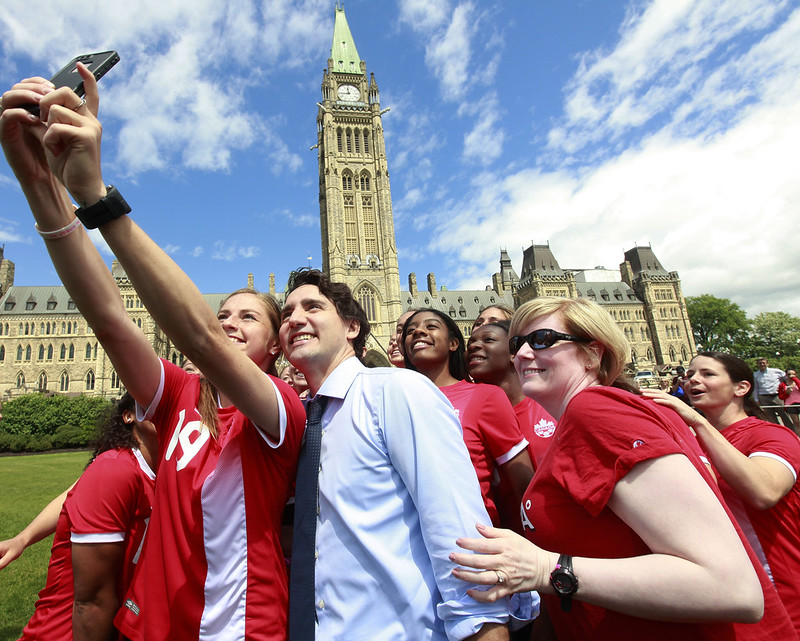